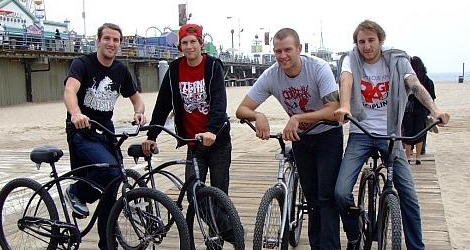 A lot can happen in five years. For Miles Away the last five years have been spent growing, learning, touring, loving, celebrating and living. Five years ago, Miles Away released their last full-length album, “Endless Roads” and now they return with a new follow up LP titled, “Tide”.

Proving distance is no divide when it comes to songwriting, now Berlin based guitarist Adam Crowe collaborated electronically with Cam Jose on the song writing and structure for the new album, trading riffs and ideas via email. The process was slow going, not because of their residential locations, but due to a desire to fine tune the song writing process and produce a record they all can be proud of for years to come.

When it came to enlisting help to record, Miles Away, have a myriad of friends from all corners of the globe to call upon with former Defeater drummer Andy Reitz agreeing to lay down drum tracks on the album, while joining the band on bass is Adam’s younger brother Jared Crowe of Perth outfit, The Others.

Together they entered Getaway Studios in Boston with producer Jay Maas during July/August 2014, with the end result then mastered by Brad Boatright at Audiosiege.

Pitching in on backing vocals are Zach from Bane, Jake from Dreamtigers, Dahei from Japanese band Cleave and renowned Aussie crooner Jamie Hay who put in time with A Death In The Family, Pitfall and Conation.

Entering their thirteenth year as a band, Miles Away have produced an album that touches on themes such as gratitude and positive growth but also dismay at what they see in the world around today, all with a distinct Australian feel. Vocalist Nick Horsnell’s raw and isolated vocal delivery is once again present, with the band adding more vocal melody into the mix than ever before.

“Tide” features eleven new tracks and is due out on May 8 through Resist Records in Australia and Six Feet Under Records in the US/Europe.

Saturday May 16 The Small Ballroom, Newcastle

Sunday May 17 The Brightside, Brisbane (Night)