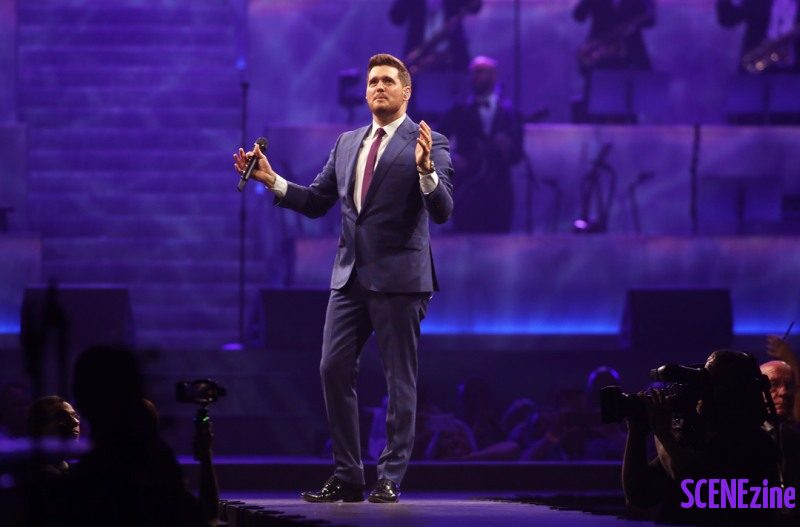 It’s Friday night in Sydney Australia and with valentines day only a week away you can already feel the love in the air. Tonight especially as the Canadian cupid himself Michael Buble is playing Qudos Bank Arena. Thousands of loyal fans pack into the arena as they wait for Michael to grace the stage.

Backed by a large band of talented musicians the time arrives for the Michael to emerge from a long staircase on stage, kicking things off with the highly appropriate “Feeling Good”. Next he rolled into the catchy number “Haven’t Met You Yet”. Soon after he paused to talk to the audience acknowledging some true hero fire fighters that were in attendance tonight.

From then on it was a night of upbeat jazz numbers mixed with heartfelt ballads as Michael crooned his was through an almost two hour long set. Some of the set highlights were the Dean Martin cover “Sway” where the bands horn section really got to show off. “Home” showed us his originals can be just as memorable as covers and “Forever Now” was a beautiful tribute to his children.
One lucky young fan Charlie even got to sing a few bars with Michael of the classic song “you’re nobody till somebody loves you”. Throughout the night Michael would display both his cheeky sense of humour and his humility making it evident why Australian’s love Michael Buble. He commanded the stage utilising both the long runway and interacting with the band giving a feeling of intimacy even though we were in a large arena. With his main set finishing off with the truly epic “Cry me a river”.

Michael re-emerged on stage to thunderous applause to give the audience an encore of three more songs. He started with “When or Where” followed by “Everything”. Lastly ending the night with a emotional cover of “You were always on my mind”. While finishing the song along the runway Michael looks up and mouths the words thank you, I love you.