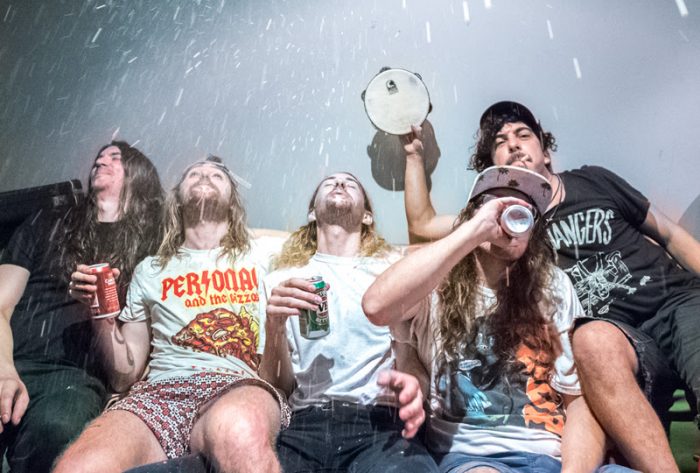 Not many bands can say they’ve played with Mac DeMarco, The Melvins and The Mummies, or that they’ve been invited to play Camp A Low Hum, Chopped Festival or NYE on The Hill twice, let alone a love themed festival in Taiwan, but then again, not many bands are Mesa Cosa.

For a renegade gang of five; sometimes six, sometimes seven, Mesa Cosa already have a swathe of accolades up their sleeve, however this new signing to 123 Agency and single tour is sure to see them delivering some of their biggest shows yet, including their appearance at Taiwan’s Love Love Rock Fest and back home at NYE On The Hill.

It’s not just their unorthodox musical chops that set them apart, the band, of guitarists, Pablo Alvarado,Chris Penny and Ian Sawyer, bassist Andrew Marty, and drummer, Steven Kelly have quickly become known as Melbourne’s busiest “Freakout Fuzz Ya Ya Gang” (a term the band may have coined themselves). Born of a chance tarot reading, they also draw influence from life’s darker side; occult celebrations and Mexican death rituals. They stay true to their “do-it-together” aesthetic, they’re consistently looking for their next Scooby Doo adventure.

“Stone Bone” is the first video clip, of many, to come from Mesa Cosa ahead of their sophomore LP, slated for release in early 2017. The band will continue their unrelenting touring with an East Coast tour this October and November, including performances at The Great Northern’s infamous Halloween Bash, River Fest in Moruya and topped off with NYE On The Hill. However, it wouldn’t truly be a Mesa Cosa tour without a detour to Taiwan‘s famous Love Love Rock Festival, to celebrate love and peace for Chinese Bachelor’s day. No, but seriously.

tickets on the door, unless specified
* tickets via festival websites