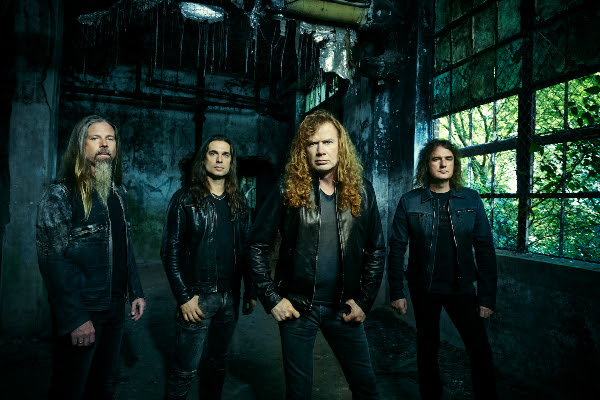 Thrash metal legends MEGADETH will return to Australia this October.  Fresh out of the studio where they have been working industriously on their new album, the follow up to 2013’s Super Collider, Megadeth are eager to return to the live arena and Australia will graciously accommodate in Brisbane, Sydney, Melbourne and Perth.

Having sold over 50 million records worldwide, earning platinum certification in the US for five albums and receiving eleven Grammy nominations, Megadeth have firmly cemented themselves in metal history as one of the most revered bands of all time. Alongside Slayer, Anthrax and Metallica they are widely regarded as one of the founding fathers of metal, responsible for the genre’s world-beating, fear-mongering, ‘wont-somebody-think-of-the-children’ mainstream status.

Megadeth’s new album, due for release in October in line with their Australian tour, will be the band’s first with a refreshed new lineup featuring Lamb Of God drummer Chris Adler and renowned Brazilian guitarist Kiko Loureiro. The band’s divisive leader Dave Mustaine spoke to Revolver Magazine about the recording saying  “There’s a lot of riffing going on in there, that’s for damn sure…I knew from the start that I wanted to go back to my roots and I wanted to make a thrash record”.

Produced by  Mustaine and mixed by Josh Wilbur (Lamb Of God, All That Remains, Killer Be Killed, Hatebreed) Megadeth’s 15th studio album has the weight of the heavy metal world’s expectations bearing down on it. It’s a gaze that has been long welcomed by Mustaine, who is notoriously unapologetic for his outspoken voice and vision.