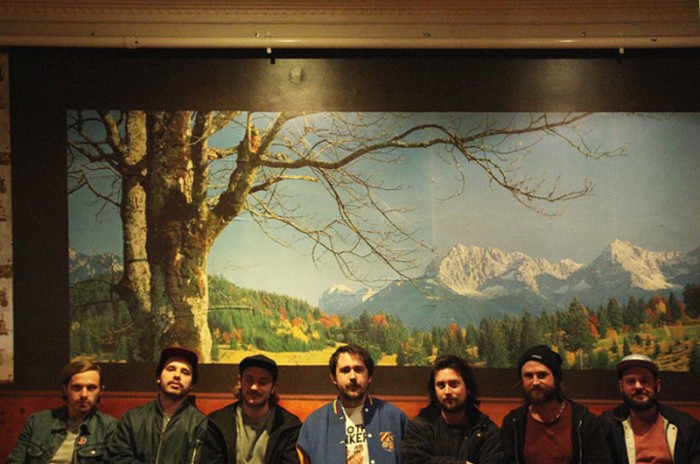 If you’re familiar with the likes of Darryl Kerrigan, then you probably know the bloke who typifies the subject matter of a Mighty Boys song. Unabashed, unrestrained, beautiful and strange.

Born of Melbourne’s league-leading DIY scene, Mighty Boys are a bunch of mates, seven thereof, who started playing together in 2012 and share an enthusiasm, authenticity and passion their audiences have found contagious.

While infamous for their facetious lyrical content, they’ve built a reputation for putting on frantic live performances with staggering energy and the band has recently made their second EP,Timely Reminders, the best way they know how: by themselves.

The first cut from the forthcoming EP, is in the form of “Dapto Dreaming”, an ode to the most infamous racetrack in Australia, a space where many dreams have been had and few have been realized, Dapto Racetrack. It’s not a celebration, but a commiseration. It’s for doggies, the spilled beer on the sandy racetrack, the dizzying heights and earth shattering lows of the punter losing it all – bouncing back – then losing it all again.

Timely Reminders, which will land later this year, is a collection of songs that together explore some of the darker elements of Australian culture. A series of tales that poke fun at, and question contemporary notions of masculinity in a country that’s always, without questioning it, celebrated the ‘bloke’.

Musically, Mighty Boys have taken on a cruisier approach with this EP, lending more weight to the lyrical content than on their previous EP, Dolecheck and Kabana. It is a marked, and some may say mature, development for a band that doesn’t know how to play it safe. While Mighty Boys is a bit older, they’re not necessarily calmer; their restlessness endures.

Mighty Boys will launch the single live at ‘Mates – A Celebration of Friendship’; an all day event at The Tote Hotel in Melbourne on Saturday April 30th featuring performances from Empat Lima, Flour, Bad Family, Bad Vision, Girl Crazy, Hi-Tec Emotions, Richie 1250 and the Brides of Christ, Phlow and of course, Mighty Boys.

Timely Reminders will be available digitally later this year and stay tuned for a new music video in the coming weeks.