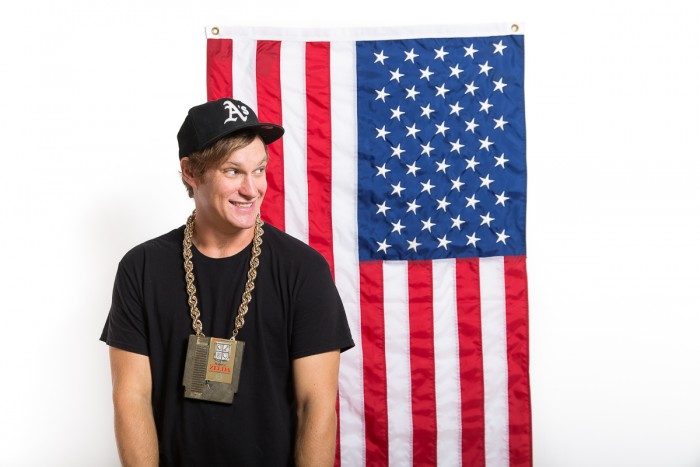 California rapper MC Lars is set to release his fourth full-length studio album, The Zombie Dinosaur LP, on the 6th November 2015. Full of his trademark literary references, nerdy lyrics and witty rhymes, it features guest appearances by Watsky, Kool Keith, and Less than Jake’s Roger Lima.  To support this will be doing headline shows in Brisbane, Sydney and Melbourne.
MC Lars will be performing on Friday 08 April at the Black Bear Lodge in Fortitude Valley (Queensland), Saturday 09 April at The Factory Floor in Sydney (New South Wales), and Tuesday 12 April at the Northcote Social Club in Melbourne (Victoria)
Zombie Dinosaur tackles such topics as post feminism in a nod to hit TV show Game of Thrones (“Dragon Blood”); disappointing reunion bands with very few of their original members (“Sublime with Rome is Not the Same thing as Sublime”); and hipster parenting (“Hipster Mom”).
MC Lars explains the meaning behind the album title –
“I feel like a dinosaur because I’ve been doing this so long, but I also feel like I’ve gotten better and better each year,” he says of his latest record. “You could also say that I’m a zombie in the sense that my rhymes and beats are more infectious with every release, and if you are there when you hear my spit, you’ll forever be converted and changed – much like the result of being bitten by a zombie. #metaphors”
MC Lars kicked off his self-penned “post-punk laptop rap” career in the late ’90s and rose to acclaim with the release of his debut recording, The Laptop EP, in 2004. Rooting out source and sample material from punk and emo bands, he quickly became revered as an important music voice.  Lars has had an Australian Top 30 song with “Download this Song” and gave a shout out to Sydney in his song “Where ya Been Lars”.
He last toured Oz in 2012 for his Edgar Allen Poe EP.
MC Lars ‘Zombie Dinosaur’ Australian Tour – Tickets on sale November 09 2015
Queensland
Friday 08 April
The Black Bear Lodge, Fortitude Valley, QLD 18+
Tickets from www.oztix.com.au
Doors open 7.00pm
New South Wales
Saturday 09 April
The Factory Floor, Marrickville, NSW 18+
Tickets from www.factorytheatre.com.au
Doors open 7.00pm
Victoria
Tuesday 12 April
Northcote Social Club, Marrickville, VIC 18+
Tickets from www.northcotesocialclub.com.au
Doors open 7.00pm