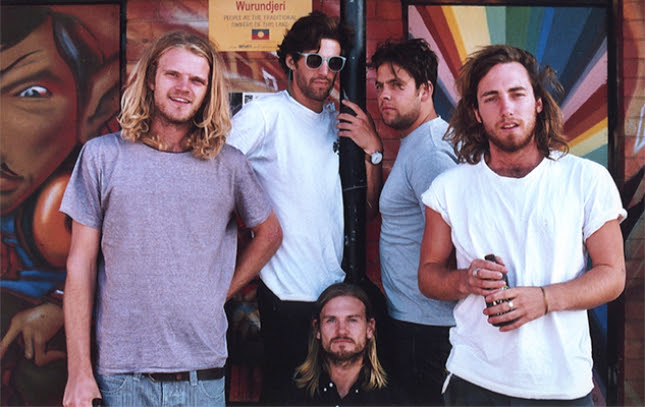 Melbourne rockers fire up for the release of their debut album with wild new song.

With a lead guitar riff that stabs you in the ear drums, hyena howls shrieking in the periphery, and a rhythm section that thunders across you like a coal train carriage, ‘What The Priest Said’ hails from an age when rock ‘n’ roll didn’t have to fight its way onto the airwaves, and live music wasn’t a species on the edge of extinction.

The latest single from Melbourne five-piece The Mary Goldsmiths – the bastard love child of the local rock scene, featuring members of The Pretty Littles andNortheast Party House – is a banging introduction of what we can expect from the group’s debut, self-titled album, set for independent release August 27.

Having formed just over a year ago through a shared desire to sing dark punk rock drenched with lyrics about sex, politics and religion (you know, all the the good, wicked stuff),The MGs have since carved their chops on stage by headlining local Melbourne pubs, dives and clubs, as well as residencies on some of the city’s most hallowed live training grounds, including the iconic Cherry Bar.

You can hear that harnessed energy rumbling below the barks of frontman Harry Croft on ‘What The Priest Said’, as he huffs and puffs with the heft of Australian vocal heroes like Tex Perkins (think The Cruel Sea’s ‘Better Get A Lawyer Son’) and Rocket Science giant Roman Tucker.

LISTEN TO ‘WHAT THE PRIEST SAID’ HERE:

The track, along with a swag full of granite counterparts, is set to be unleashed live when the album is launched on August 27 at The Workers Club in Fitzroy.

So follow them into rock ‘n’ roll deliverance children, and listen to what the priest said.