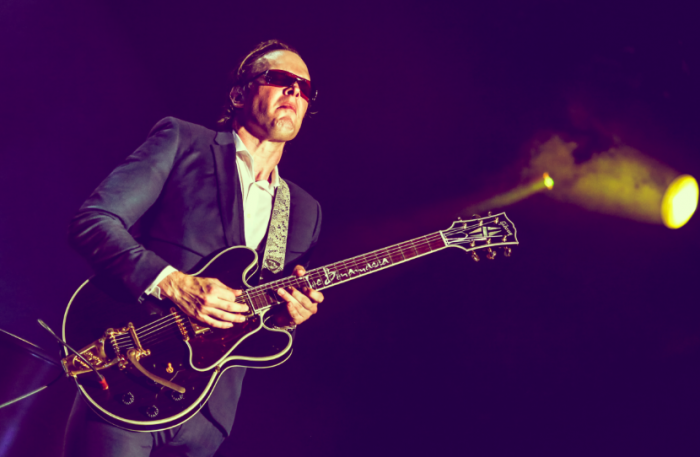 On September 23rd, GRAMMY-nominated blues-rock guitarist Joe Bonamassa will deliver Live at the Greek Theatre, a 22-track Double CD, Double DVD, Blu-ray, and 4-LP Deluxe Edition tribute to three of the greatest bluesmen to ever live – Albert King, B.B. King, and Freddie King. Live at the Greek Theatre showcases “The Three Kings” tour of 2015; a 14-date US amphitheater tour that culminated at famed Los Angeles venue The Greek. Bonamassa celebrates the trio of blues icons with over two hours of some the greatest blues songs ever written. The release includes a collector’s edition booklet, and several bonus features containing behind-the-scenes footage and more. Public TV and MTV Live, formerly Palladia, will broadcast the epic Blues tribute performances during their August and September schedules.

Playing on a warm summer night to a nearly sold-out crowd, Bonamassa’s handpicked set list of songs was called “spectacular” by Premier Guitar; Los Angeles Times said the show “had swing and polish” and that “Bonamassa evoked the signature licks of all three icons while managing to put his own stamp on things.”

Songs ranged from blues standards to deep cuts, including “Born Under A Bad Sign,” “Lonesome Whistle Blues,” “Hummingbird,” “Let The Good Times Roll,” and, of course, B.B. King’s famed “The Thrill Is Gone” as the evening closer. For Bonamassa, the tour’s importance deepened significantly when B.B., his friend and mentor, passed away two months before it began. “My only regret is that B.B. was not alive to see it,” said Bonamassa.

‘Live At The Greek Theatre’ is in store September 23 via J&R Adventures Purchase via iTunes here.

Fans will instantly receive a free download of the track “Let the Good Times Roll,” as a thank you for pre-ordering the new Album