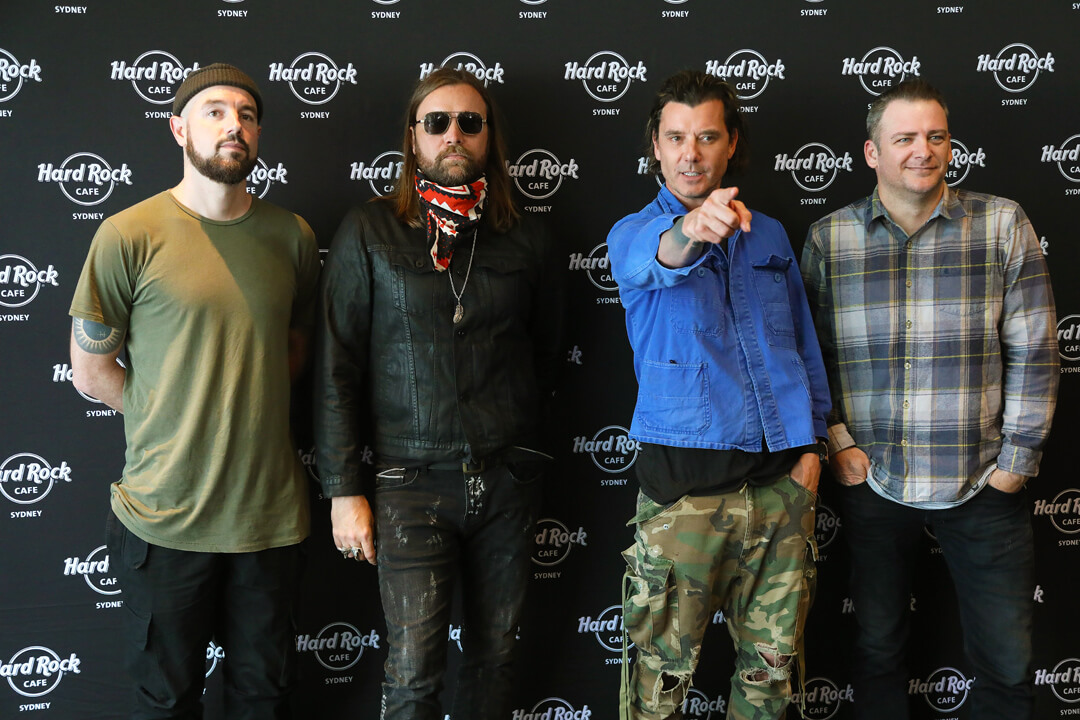 After many delayed starts, the Under The Southern Stars concert series is about to commence the first national live festival tour since the pandemic started in 2020. The SCENEzine team was invited to a press conference featuring all the bands and caught up with Gavin Rossdale, frontman of Bush.

SCENEzine: Firstly, welcome back to Australia. What’s it like to actually be here?

Gavin Rossdale: Yeah, I haven’t yet connected to why I’m here. I know why I’m here – I woke up this morning going “what’s that anxiety? Oh shit, we’re playing!” It feels like such a world away.

I’m just like that. I have so many things going on like a list – I just don’t worry about it till I’m there. When I get there I’m like “Wow. We really are doing this”. This time tomorrow, I’ll have a different perspective, but today I just don’t have any connection to it yet.

SCENEzine: Besides playing shows, is there anything else you want to do while you’re here?

Gavin Rossdale: I love culture. Just walking around Sydney these last couple of days – it’s so beautiful how it’s all built up. All the centres, the food areas, the restaurants – it’s just urban planning. It’s amazing. It’s really built for people to have a good time.

That’s what I like about the psychology of Australia – everyone’s just building stuff so it’s very experienceable. The kind of places I’ve been wandering around – we could all do with those in London and where I live in America. We don’t have places that good. It’s beautiful.

SCENEzine: You are here for the Under the Southern Stars tour alongside Stone Temple Pilots. What’s it been like touring with those guys throughout the years and seeing their changes?

Gavin Rossdale: Well we’ve done a couple of tours with them. Recently, we were on the first tour when Jeff joined. There were people who were like “he’s not Scott” – like no shit, Sherlock!

I’m so happy for the band, they get to play those incredible songs. What [else] are they supposed to do?

Jeffs a great singer and he gave them the opportunity to go and play these songs again. I want them to be able to play those songs, they deserves to. Jeffs doing great.

SCENEzine: Do you have any memories of when Bush were here for Soundwave Festival back in 2012?

Gavin Rossdale: I loved it and I remember, I’ve got chills just thinking about it. I said as soon as I got home “that was amazing! The sideshows were almost better than the festival”.

The festival grew for us – when it first began it was really quiet. Then within a couple of days the word got around and we’d play and we were quite proud of it.

I loved it here so much that I was like “we’ve gotta go back, its only a flight away!”. Everyone talks about the journey and the flight but you get on a plane, and then you get there. From London its about 24 hours, but from L.A., it’s a short flight. And I begged to come back here – nine fucking years and two records later…

SCENEzine: Huge congrats on your newest album The Kingdom. You must be super proud of how that turned out?

Gavin Rossdale: And I feel the same way about our next one. We’re working on a new one now. All of the songs are written and it makes me so excited. Where The Kingdom left off, it has continued on.

I always make jokes about how at this point in my career I could do mid-tempo or acoustic ballads and people would be like “yeah fair enough, check out the old stuff” – but I really want to do stuff that just surpasses that – destroys it. You feel silly playing songs that sound a bit light after playing some of these songs. And I love that, its just brilliant, it keeps it so vitalised.

I think our entire career has been a succession of surprises and doing things along the way. We came up with Bush during the height of Brit-Pop in London. It’s the worst commercial idea you could ever have, cause everyone’s looking for the next Suede or Blur, and here we are wanting to be whoever we wanted to be. Here we are now making records that are more vitalised than any we’ve ever made.

And I don’t know what it is – it’s just appreciating that there was no horizon – it was like endless success and everything was easy. We’d go on tour, play to 20,000 people, it seemed to have such an effortless quality to it, which in turn sometimes made things harder, but now we’re just so grateful for everything and those songs are just as exciting. If you liked that record, you’re going to love this one.

SCENEzine: Is there any news on if the album will ever be on vinyl?

Gavin Rossdale: It’s just getting anyone to spend any money ,we had 45 million streams and we got paid one hundred grand. Somebody, somewhere made some money, but its wasn’t us. So you think they could’ve sprung for a fucking vinyl. Shame on them.

SCENEzine: How did it come about having Bullet Holes featured in John Wick 3?

Gavin Rossdale: Well, the lucky thing was that I did a couple of songs with Tyler Bates, and he was doing the music for John Wick. So when he goes to the studio, or when Chad [Stahelski] the director rang him and said “what else are you working on?” – [Tyler] played him Bullet Holes and he lost his mind – because I wrote that before I knew about John Wick – the whole bullet holes, the symphony – it was like synchronistic.

SCENEzine: A huge crowd favourite is Glycerine. Can you tell me about the feeling you get when playing that live?

Gavin Rossdale: It’s pure gratitude. You just have some songs that are bigger than you. I have a couple on this record – I have one song – I think it’s called Slowly Sinking and it’s exactly the same feeling as Glycerine where I’m like “is this someone else’s song? Cause there’s something ancient about the DNA of the song that caters to the melody and the way it explodes – you know? So far so good.

I’m just so grateful for that song. I remember when I first played it to the band – no one really paid attention, I was really annoyed thinking “you fuckers don’t know the legs of this song – you should just let me finish it”. That song has given us everything. And it’s so funny cause always with rock bands – their softest song is their most popular song.

SCENEzine: While watching the video for that song, I notice that you pretty much look the same. Have you discovered the Fountain of Youth?

Gavin Rossdale: Thank you. I mean – I think good genes, being mindful and you know…I just lucked out. The funny thing is, when I was a kid – 18, 19, 20 – going out, I used to get refused entry into bars and clubs and pubs and I was so humiliated. So many times and I just thought “one day this is going to work to your advantage”. We’ve now reached that point – that’s it, it’s really simple. It was humiliating because it happened all the time and it was embarrassing…and here we are now.

***All previously purchased tickets are valid for 2022 see website for details.***