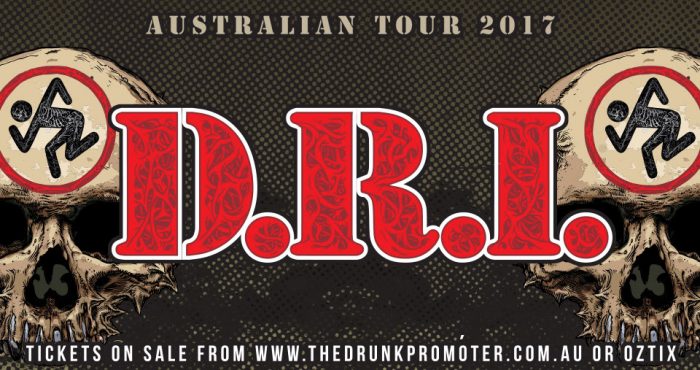 After touring with my mates Clowns for 5 weeks in Europe, and attempting to drink every beer in the continent, I’ve decided to put the bottle down and tour one of my favourite bands.

For the past 30 years, D.R.I. has been the epitome of the aggressive, hardcore-punk thrash sound that we’ve all become accustomed to hearing. Throughout this time, they’ve been one of the few genuine underground bands to remain true to their pure punk roots and are cited as a major influence behind modern heavy music.

Still actively touring and recording, the only thing that may have changed is that they’re a little older but time hasn’t gotten the best of the Dirty Rotten Imbeciles. With a reputation as one of the most intense live acts you will ever see, they are still thrashing just as hard and just as loud as ever, continually blowing away audiences all over the world with the unique & undeniable D.R.I. sound.

With 30 years, numerous EP’s and seven albums to their name, Dirty Rotten Imbeciles are revered as the creators of the crossover thrash sound that has served as a model for iconic bands like Suicidal Tendencies, Municipal Waste and Corrosion of Conformity. Their 2016 EP ‘But Wait There’s More’ on Beer City Records has cemented this legacy and Australian fans can expect to hear tracks from this as well as ‘Dealing With It’, ‘Thrash Zone’, ‘Crossover’ & ‘Violent Pacification’ during their monster hour and a half set when they hit Australian Shores.

Do not miss D.R.I. touring all over Australia in February 2017, including places they’ve never played before. See you in the pit…