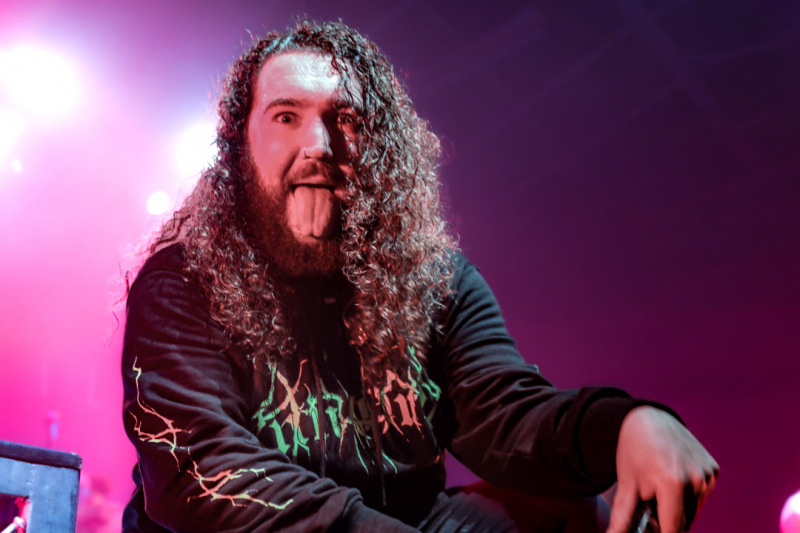 Back in July 2020 I Prevail along with Motionless In White and Windwaker were meant to be touring Australia. Now after a global pandemic and some tour rescheduling fast forward to June 2022 the tour is finally happening.

It’s a cold night in Sydney but thousands have gathered snaking their way all the way from big top doors to the glow of the laughing clown at the Luna Park entry. Tonight’s sold out show promises to be lit.

First on stage were Aussie metalcore up-and-comers Windwaker. Keeping the crowd entertained as the bar and merch lines grew, these guys brought an energy to the room that hyped us all up for the night ahead.

It wasn’t long until the lights dimmed as Motionless In White emerged on the stage kicking off their set with “Disguise”. Throughout the set, goth icon Chris Motionless had the audience in the palm of his hand. The crowd was in full voice for “Voices” and “Another Life” – both clearly huge fan favourites. Since the band are currently celebrating the release of their new album ‘Scoring the End of the World’, it only seemed fitting they would play the album title track and hard-hitting dark electro track “Cyberhex”. The set signed off with “Eternally Yours” as Chris threw out roses to the audience.

After a short break, the time had finally come for Michigan metalcore juggernaut I Prevail to get rowdy. With a sold out capacity crowd in full appreciation that tonight was finally happening, it seemed more than appropriate that “Bow Down” got things under way.

Next up was “Gasoline” which fuelled vocalist Eric Vanlerberghe to pause between songs to take part in the Australian tradition of doing a shoey.

Songs like “Scars” and “Hurricane” led by the soaring vocals of Brian, reminded us all why we are here tonight. As crowd favourites, the tracks made for a singalong experience that only live music can provide. Although the tour was pushed back two years, it was truly a blessing in disguise, as the new dates coincide with I Prevail set to release their new album ‘High Power’ in August. We were lucky enough to be some of the first to hear killer new track “Body Bag” live, before being treated to a drum solo by the ultra fit and talented Gabe Helguera in the song “Paranoid”.

For the song “Breaking Down” vocalist Brian shared his personal struggles with mental health. He thanked his band mates and fans for getting him through dark times, giving the audience a much needed reminder that we are not alone & there is always someone to talk to. The set closed with “Deadweight” from their hugely popular ‘Trauma’ album.

The band then left the stage as “one more song” chants began from the crowd who weren’t willing to go home yet. I Prevail remerged, thanking the Sydney crowd for the best show of the tour before ending the night in high energy fashion with “Come And Get It”.