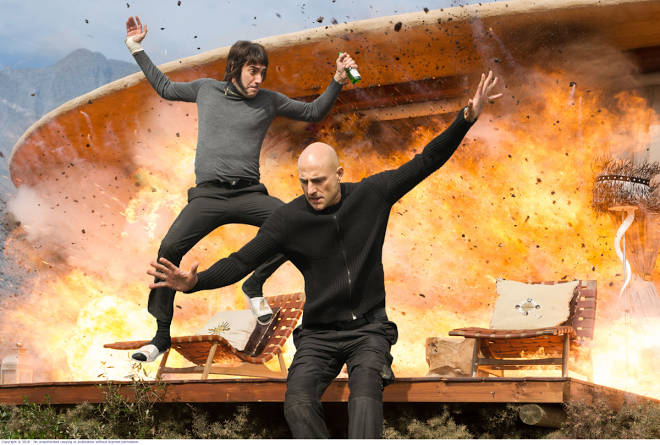 Character actor Sacha Baron Cohen flexes his comedic muscle again as he plays dim-witted Nobby a crass English football hooligan. The movie sees Nobby reunited with his little brother 28 years after losing contact as a child. Then to later discover his brother is now a trained MI6 assassin. Which sees Nobby himself caught up in the dangerous life his brother now leads.

This really is a great mix of both action and comedy. The action sequences are explosive and easily stack up next to many of the genres counterparts. The comedy in predictable Sacha fashion is shocking, pushed to the limit and has hilarious consequences. Not to spoil anything but there’s a particular scene with an elephant that can be quite confronting.

The movie also has some Australian representation featuring Sasha’s real life wife Isla and Rebel Wilson plays his on screen girlfriend. All characters throughout the film are clearly defined and whilst Nobby continually seems to screw things up he has a loveable idiot quality.

If you are a fan of Sasha’s previous work then definitely give Grimsby a shot. It may not be his best comedic role to date but it still provides plenty of laughs and has a great re-watchable quality about it. For those who are unfamiliar with his previous work or who are easily offended this may not be for you.

The Blu-ray version of the film has lot of great features included such as a blooper reel, the making of and deleted scenes. Which provides more than enough incentive to buy even if for the blooper reel alone. Ultimately Grimsby isn’t going to win any Oscars but it does fulfil what it set out to achieve providing a action packed laugh out loud comedy in the style that only Sacha Baron Cohen can deliver.

For fans of – Borat, The Dictator, Kingsman Secret Service