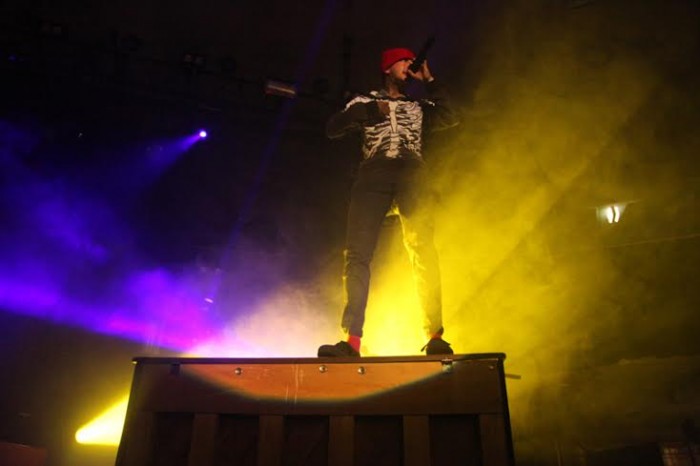 The time had finally come for Twenty One Pilots to return to Sydney for their first of two sold out Roundhouse shows as part of Groovin the Moo sideshows. After seeing them previously at Allphones Arena when they supported Paramore and their headline show at Metro Theatre last year I knew I was in for a great night. Inside of the roundhouse the anticipation for Twenty One Pilots arrival was reaching fever pitch as this vocal capacity crowd became more eager as every second ticked by.

Screams let out from the crowd as Josh and Tyler hit the stage bursting through a fog of red and white lights kicking things of with “heavydirtysoul”. Both members were masked as Josh furiously pounded away on his drum kit while Tyler sang intensely with tambourine in hand wearing a skeleton jumpsuit. Tyler bounced around the stage while the audience would help sing every word. The song then flowed into the hit single “stressed out” with Tyler now unmasked and also playing the piano. This song resonated with the crowd and it was obvious to see why radio stations worldwide have been all over this track.

The duo then took us back in time to play some of their earlier tracks like “guns for hands” and “migraine”. The energy of both the band and crowd wouldn’t let up. It seemed no matter what song they played the audience knew every word. Tyler even stopping between songs to make sure everyone was ok.

The ukulele made a welcome appearance helping to slow things down a little. As Tyler wore white sunglasses singing “house of gold” then flowing into “we don’t believe what’s on tv”.
Also throwing in a cover of Elvis Presley’s “can’t help falling in love” which was both heartfelt and memorable.

For “holding onto you” Tyler came out into the crowd standing on top of the audience starting off the song with a sea of camera phones trying to capture the moment. He then made his way back onto the stage leaping around commanding every single persons attention.

Before they started “ride” a drum kit was pushed out on top of the crowd as Josh climbed on with red hat backwards. The shrieks from crowd were deafening possibly due to the fact he was shirtless and in great shape but also is an incredible drummer. The dynamic of bringing Josh out into the crowd worked really well reaffirming that this band is not all just about Tyler both guys are super talented.

My personal favourite moment of the night came from ‘tear in my heart”. When hearing a song live that you really connect with from an album you hope that live it’s just as good. In this case it was even better. Everyone sang their lungs out as if to be providing a backing choir that would fill every inch of the Roundhouse. Then it was time for the breakthrough hit “car radio”.
During the song seemingly from out of nowhere Tyler appeared upstairs on the second level of the Roundhouse gaining the crowds attention then getting them to bounce their hands in unison. A fury of strobe lights lit up the venue as the gig turned into a mini rave. As the song drew to a close the lights went dim as the boys had left the stage and whilst this had been a truly amazing show I had a feeling this wasn’t the end.

The lights then came back as Tyler sat perched behind the piano playing the more sombre track “goner”. This displayed his raw emotion through his lyrics and how the bands quieter moments can be just as captivating as their high energy ones. The track reaches crescendo as Josh pounds away while Tyler screams I wanna be known by you. This then led us into the last song of the night “trees” another song that starts out slow and builds and build it did. With both Josh and Tyler climbing on top of the crowd with a drum each as they banged away while the dance beat background music kicked in. As streamer cannons from the stage shot into the air and smoke machine’s filled up the stage this was the perfect way to end the set. The boys then took a bow on stage thanking the audience and assuring us they will be back in Australia again.

Walking away from the gig I was truly impressed. Not just by the way they rule the stage or their entertaining backflips. It’s a combination of so many things that makes Twenty One Pilots great. Tyler’s intelligent yet relatable lyrics provide the strong audience connection. While some of the speeds in which he raps are truly astounding. Josh was beat perfect all while doing it with a smile on his face. Plus you have to keep reminding yourself this is only two guys. I really don’t know what genre to even call their music but it’s music I love. Maybe their hip hop, electro, alternative, rock I’m not sure. Ultimately they are part of the fuelled by ramen family which has a roster that features Panic at the disco, Fun, Paramore and Gym Class Heroes so whoever is signing these bands is doing a great job. Twenty One Pilots are no overnight success either they have been at it since 2009 and it’s great to see how far they’ve come. Looking forward to seeing their Blurry faces next time they hit Australian shores.