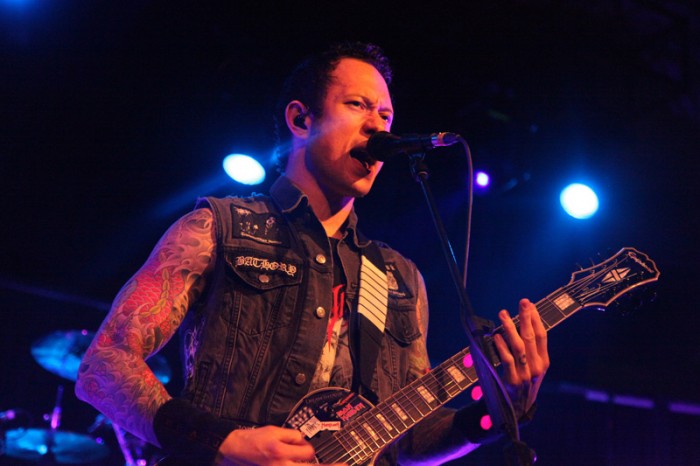 What better way to spend my Saturday night than in the sweaty confines of the Roundhouse in the company of metal heads. This is the final show on the tour and it promises to be a big one.

Most bands have an intro music Trivium kick things off with a tape play of Iron Maidens Run For The Hills. Pirched up top with beer in hand I watch the band take to the stage one by one with the Snøfall playing on tape as do and this leads directly into Silence in The Snow. All I can see from up high is a sea of bodies bouncing up an down. It’s like watching the ocean, an ocean floating all the way Into The Mouth Of Hell.

Trivium ! Trivium ! Trivium ! the crowd chants, lead singer Matt Heafy asks the crowd whose first time is it tonight ? some cheers go out then when asked whose seeing Trivium for the 5th, 6th or more time a roar comes from the crowd. ‘With this being the last fucking night of the tour we need you to go hard’ says Matt he then ranks the cities who partied hardest from Perth, Melbourne to Brisbane who are currently in first place.

Pushing on through Strife, Rain and Blind Leading The Blind  Circle pits and devil horns saluted way up high are all present from the crowd accompanied with neck breaking head banging and crowd surfing.

Right before we get into Anthem which is dedicated to us in the crowd and there fans world wide, Matt declares that if anybody leaves here with a shred of their voice left then we haven’t pushed ourselves hard enough. I think we needed no more encouragement but it worked as we sang our hearts out screaming ‘We Are Fire‘.

The Roundhouse is rocking under the crushing sound of these metal titans but it all comes to a stop during Like Light To Flies as a punter is ejected from the show for punching a fellow gig goer spotted by Matt himself he even has is own flashlight to shine on the guy as security make there way to him ‘ we don’t want to see that at a Trivium show’ he says. The crowd agrees and then we all continue on with the show.

Let me tell you I have seen a lot of bands at the roundhouse over the years an no genre sounds better then metal in its walls and no metal band over the years have sounded as awesome as Trivium do tonight. Add to that some sick ass lighting and you got yourself one of the best shows of the year.

The 16 song strong setlist goes for almost two hours. It’s full of Trivium goodness as we get a mix of songs from albums Ascendancy through to Snowfall and then they play a track I was hoping to hear Dying In Your Arms a killer track from my favourite album.

Most bands leave with a thank you and good night. Not trivium that’s just not the most metal of ways to end things, as Pull Harder on the Strings of Your Martyr ends the actual set, new drummer Matt Madiro treats us to one of the most epic drum solos of all time, it takes us all the way to the encore.

In dire need of being able to take a breath and maybe grab a beer for refreshment I am not given the time as the band re-emerge and we are informed that currently we are tied with Brisbane for best audience. Now after being told that, we get ready to ramp up, how could we not when state pride is at stake.  We give it our absolute all as the crowd erupts and the music comes out from the speakers crashing over us In Waves.

After it was over we claim our prize of first place for best state on the tour and then its so long good night and thanks for coming they leave a tape playing of Ace of Spades from legends Motörhead and our night is over but it was one hell of a show.