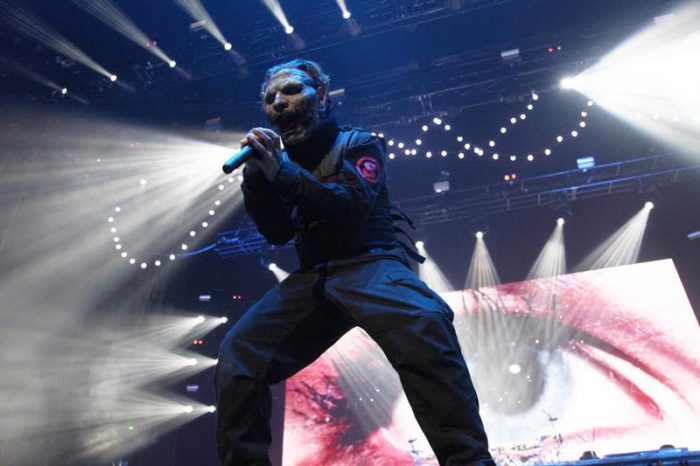 It’s a Saturday night in Sydney and just days before Halloween and at Homebush you could sense a little dark madness in the air as the sun was going down. Walking to the venue an army of black t-shirt wearing Slipknot fans were descending upon Qudos bank arena for a night of metal. In stark contrast a sea of Wanders soccer fans were coming from the carpark to see their beloved team. I guess both crowds were in for very different nights.

Just hearing the band name Slipknot alone is pulverising in itself. They burst onto the metal scene way back in the late 90’s and have been a relentless aggressive force ever since. It’s the mix of the intimidating horror style masks, multiple band members and not to mention Corey’s iconic vocals that all come together to show why they have reached cult status. That was evident by the thousands in attendance ranging from new youngers fans, fans dressed as band members and the die-hards you could tell had been with the band since day one.

First up on stage was Australia’s own In Hearts Wake. These Byron Bay metalcore lads genuinely looked stoked to be their even explaining how honoured they were to be representing heavy Australian music on stage. They chugged their way through a eight song set including the likes of heavy hitters “Breakaway” and “Badlands”. It would of been no easy task for any band to get onstage in front of thousands of rowdy Slipknot fans but In Hearts Wake definitely got the night started in the right way and I’m sure gained a ton of new fans.

After a short break it was time for main support Lamb of God to take to the stage. These American thrashers personify what it is to be metal. There were no flashy gimmicks just 5 guys playing aggressive heavy music and the crowd loved every minute. Singer Randy would bound around the stage with furious energy. Only stopping to throw water over himself and crowd.
You could tell the crowd wasn’t just there for Slipknot as circle pits were opening up in the mosh pit and many were singing along to Lamb of God fan favourite’s like “Walk with me in hell” and “Redneck”. Lamb of God’s set was so good that it almost made you forget that another band was coming on after them.

Now the moment had finally arrived the anticipation in the building was electric as the crowd began to chant for Slipknot. Everything went pitch black, the curtain opened and then there they were to deafening screams from the crowd. Slipknot wasted no time in getting the party started, immediately kicking things off with the brutal track “the negative one”. From there both the crowd and band didn’t let up. At one point Corey stopped to ask if there were any fans of the album Iowa in the house as they are celebrating the fifteen year anniversary and with a roar from the crowd they tore into the track “the heretic anthem”. Absent on stage was Clown due to a family emergency which Corey addressed and told the audience Clown sends his love and dedicated “the devil in I” to him.

The whole night was a huge spectacle to watch. It was hard to know where to focus on with so much going on from the huge haunting visuals displayed behind the stage, to all band members commanding your attention and the intensity of the mosh pit was something to behold. They closed out the set with two massive Slipknot anthems “wait and bleed” and “(sic)”.
But a noticeable huge crowd favourite hadn’t been played so obviously that wasn’t to be the end, and of course it wasn’t. After a few short moments and screams from the crowd the band remerged and went straight into “surfacing” and then”duality”. Lastly it was time for “spit it out” and it seemed like both the crowd and band pushed them selves to that absolute limits for this one.
Corey even stopped the song mid way through to make the entire audience get down low then to jump up on his command. When they kicked into the songs final chorus the entire crowd jumped and moshed which was an amazing sight to see. As the song ended Corey said “we fucking love you, take care of each other”.

Throughout the night Corey would address the audience as his family. For a band as huge worldwide as Slipknot is it was great to see how genuinely appreciative of their fans they are. Leaving the venue I heard punters saying best gig all year and everyone even the most hardened metal guys had a smile on their faces. It’s clear to see Slipknot are much loved by the metal community in Sydney. It was a night that both the band and crowd won’t soon forget. For those living in Melbourne your last chance to see them before the tour ends is on Monday 31st at Rod Laver. I’ve got to say us Sydney siders are a little jealous Melbourne get to see Slipknot on Halloween I’m sure that’ll be a crazy show.