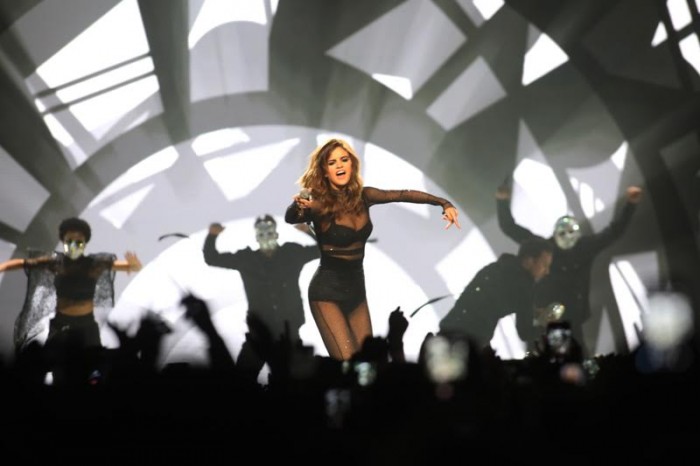 After a previously cancelled trip Sydney Australia was finally going to be able to experience the gorgeous Selena Gomez live. It was a cold winter night at Homebush but as the thousands of fans descended upon Qudos Bank Arena I could tell things were about to heat up.

Supporting Selena was American pop band DNCE featuring Joe Jonas on vocals. They burst onto stage getting the party started wearing neon and creating instant energy. Having DNCE seemed like a perfect fit. DNCE gave an upbeat setlist that included a cover of TLC’s “no scrubs” and of course their huge radio hit “cake by the ocean”.

The moment had finally arrived for Selena to take the stage. The arena was dark as the thousands of Gomez fans waited in anticipation. She strutted onto the stage accompanied by her back up dancers as the audience cheered and screamed with excitement. Displaying that fans seeing their idols live is an experience not to be missed.

The concert had everything you could ask for. The jumbo screens, high energy back up dancers, live band on stage. All that aside the audience seemed to be transfixed on Selena’s every move. Sure there’s no denying Selena Gomez is stunningly beautiful but tonight she proved she’s not just a pretty face. Her vocals and choreographed dance moves were both on point. Throughout the show she also had a few costume changes displaying everything from sexy to glamorous.

During the long set she played hit after hit of crowd favourites including “good for you”, “hands to myself” and “kill em with kindness”. Even covering Eurhythmics “sweet dreams” and taking on Zedd’s “I want to know” turning the whole arena into a dance party. Between songs she thanked the crowd and apologised that she hadn’t come sooner but judging from the crowds reaction she was well worth the wait.

She finished up her set with her latest album’s tittle track “revival” thanking everyone again and promising a new album and a return to Australia in the near future. Selena seemed genuinely happy to be on stage, smiling throughout and chuffed by the size and excitement of the crowd. The concert was originally intended to be at Sydney’s Hordern Pavillion but due to high demand it needed to be upgraded to the Olympic size Arena. This kind of demand from Sydney Selena fans proves her star power is strong in the land down under.
Hopefully the actor, model and talented singer brings her body heat back to Australia soon to kill us with some more kindness.