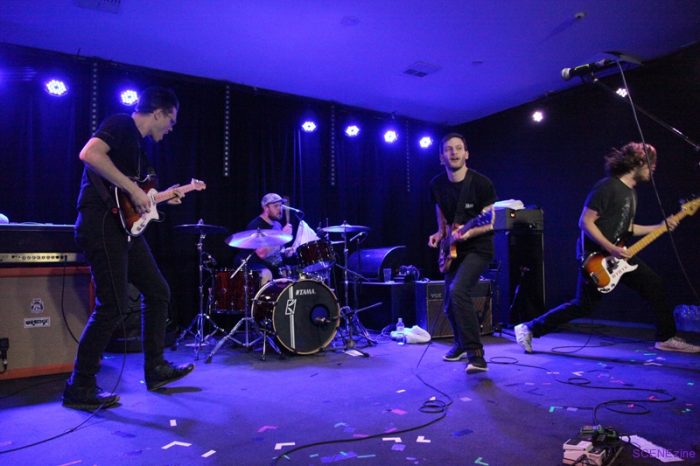 It is Saturday night and I am at Newcastle’s premiere venue establishment for live music The Cambridge Hotel. I have made the trek up north to catch Canadian punk band Pup, these guys are having a stellar year since the release of there latest album The Dream is Over and are now touring around Australia giving fans a chance to hear these killer new tracks live along with some of their previous works.

They open things up with the first track off the new album If This Tour Doesn’t Kill You Then I Will, instantly the crowd start singing along those at the front begin to move side to side and raise there hands high, eventually the side to side movement becomes a mosh complete with crowd surfers and stage divers as the music intensifies and the song transitions into the next track DVP. Wow what an opening performance.

Those up the front would stay up all night and be constant with there energy never stopping and only growing in size with each song played. On the track Dark days the lead singer would go to open the mic to the crowd only to be dragged into the chaos up front and then kindly surfed back to the stage again to finish off the track before belting another newie Can’t Win.

On stage this four piece give it there all constantly moving to the beat exuding the sort of boundless and enthusiastic energy their music creates, they sound really good live and are keeping things nice and tight. This isn’t their first tour down under having previously been here supporting The Smith Street Band so when they take the time to show there appreciation for the crowd turning up and showing them so much support, you can really hear they mean it and feel like giving yourself a pat on the back for turning up and giving great live music a chance.

The set would be pretty much 50/50 in terms of music off the new album and their previous self titled debut. aside from the three big songs played in the opening, other great tracks on the night were Guilt Trip, Mabu, Back Against The Wall and they finished off the 15 song strong setlist with Reservoir. I mentioned before the mosh would go hard all night but things at the end would only get ramped up when a film crew documenting the gig headed into the circle pit to catch the action up front folks couldn’t help but go even harder for the camera which should make for some great footage of how much us Aussies love live music.

There isn’t much to say about the encore except lead singer Stefan Babcock thinks they are stupid things and i would agree with him so with that they just launch into it with one more track before the night’s end. The track is Old Wounds it bursts forth from the speakers with the sort of intensity you have heard all night but given that it is our last chance to go hard it comes across some how as even more fast and louder then all the songs before it. At its end Stefan gives the indication to crowd to catch him and that they did as he finishes the song from the hands of those at the front. Pup are still out there on tour so if you haven’t caught them yet go do so.