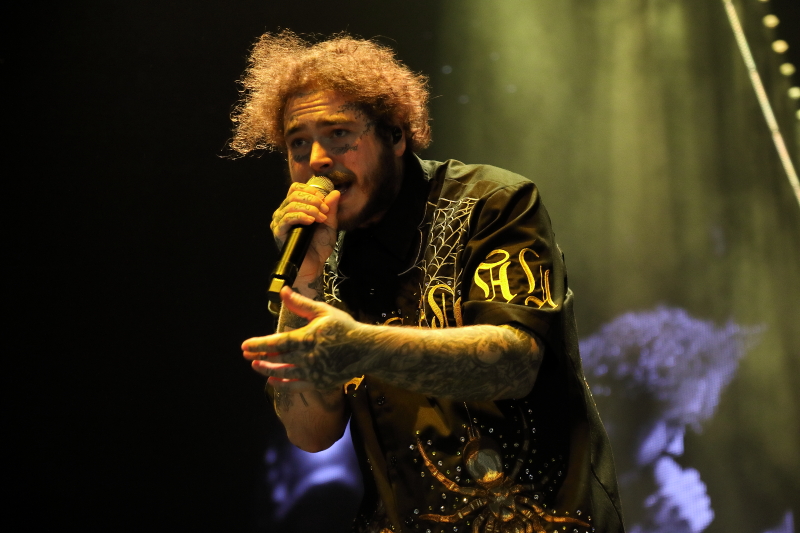 Just over a year ago I was in Las Vegas at an after party for Billboard Music Awards in a swanky night club watching Post Malone. That night he didn’t start until around 2am and he only sang a couple of songs while standing on top of the bar. Now fast forward to tonight in Sydney Australia while walking to Qudos Bank Arena with thousands of other fans I have a feeling tonight’s production value will be much higher.

A DJ warmed up the capacity crowd playing current bangers then American rapper Tyla Yaweh took to the stage. He bounced around the stage looking in his absolute element and even at one point jumping the barrier to get down amongst the energetic Sydney crowd. After a short break we then had the iconic Jaden Smith take to the stage. With his video clips playing on huge screens behind him he rapped his way through a relatively short but still memorable set.

Now the moment the entire arena had been waiting for had arrived. The lights came up on the runway stage to reveal the man of the hour Post Malone. Cheers and screams from the crowd were at fever pitch as he kicked off his set with the track “broken whiskey glass”. From then on the energy level from both Post Malone and the crowd didn’t waiver. It was really quite a site to see watching one man have an entire arena in the palm of his hand. There’s almost too many crowd favourites songs to mention but some absolute singalong highlights came from “better now”, “candy paint” and “I fall apart”.

Post Malone slowed things down by playing an acoustic guitar for the track “stay” whilst the audience lit up the whole arena with their cell phone lights. We were also treated to the song “sunflower” featured in the latest Spiderman film. Towards the end of the set not only did he smash a guitar on stage in true rock star fashion but he also did a shoey much to the delight of his fans. The nineteen song setlist ended with his huge hit “congratulations” and then before leaving the stage he thanked everyone for being there and making his dreams come true.

Tonight Post Malone proved through his soaring melodies and visually spectacular live show complete with pyrotechnics and flames why he’s one of the hottest stars right now.