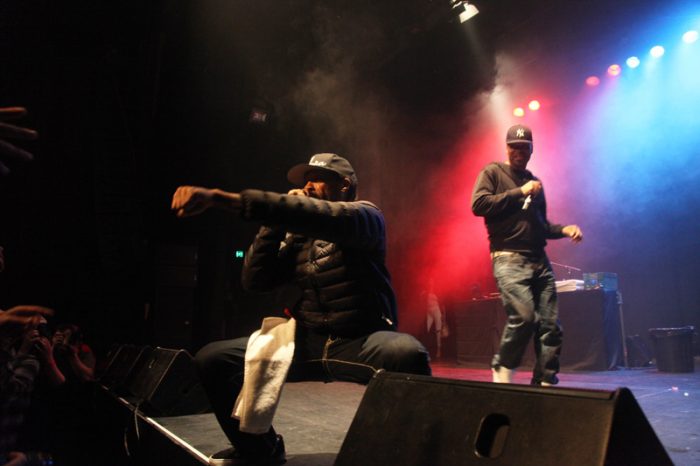 It is Halloween night in Sydney and we are in for a real treat as legendary rap artist’s Method Man of The Wu Tang Clan  and Redman from Def Squad are about to tear the stage up at the Enmore theatre as they prepare to wined up their Blackout Tour.  The anticipation builds in an already full Enmore and i still see people poring  in filling the Enmore up to the brim as we all hold down our place and get ready for the main act a DJ keeps things pumping getting us psyched up.

The duo may have kept us waiting but it was well worth the wait as when they take the stage they explode with such energy and such lyrical skillz that Errbody Body just had to scream. I watch from the back of the Enmore captivated as down on the floor a crowd would stand shoulder to shoulder from left to the right back to the front moving in away in rhythm bouncing away and getting down to jams like M.E.T.H.O. D Man Bring Tha Pain,  Let’s get Dirty and a R.I.P homie shout out to Ol Dirty Bastard covering Shimmy Shimmy Ya.

On stage they just killed showing up so many of todays young rappers or turn up cheque takers i have seen in the past. these guys came to play a show for Sydney and Sydney didn’t disappoint the smell of weed is thick in the air ever, especially during the jam How High and they even teased a film sequel to the cult classic . One over all highlight had to be when the duo called today’s DJ’s who just button push as not real DJ’s and then showed us what a real DJ sounds like as Wu Tang Dj Mathematics and Dj Dice who interesting fact was the creator of the famous Wu Tang logo were let loose on the decks. Watching these two mix things up was a real Rappers Delight they mixed tracks from all across music genres rap to rock they absolutely killed it earning a unanimous applause from the crowd.

Realising they are running short on time they ask he crowd what we want to hear to finish the set some more ole skool jams or some Wu Tang ? we all start to chant Wu Tang ! Wu Tang ! and then its three of the best Wu Tang tracks kicking out Shame On A Nigga, C.R.E.A.M and the killer Wu Tang Ain’t Nothing To Fuck With. We end the night all holding up our peace signs as they give a massive shout out to all truly great artist we have lost along the way Left Eye, Biggie, Pac, Prince, Bowie and our own Heath Ledger . Method signs off with a promise if he can get them all thru customs that next time he will bring the whole clan to which a huge roar of yea came from the crowd, true hustlers to the end the duo stayed up the front selling their cd’s.

Method Man and Redman are not only skilled legends and pioneers of the rap genre but they are true showman with a live set that had the whole Enmore vibe ing and left us on a real musical high.