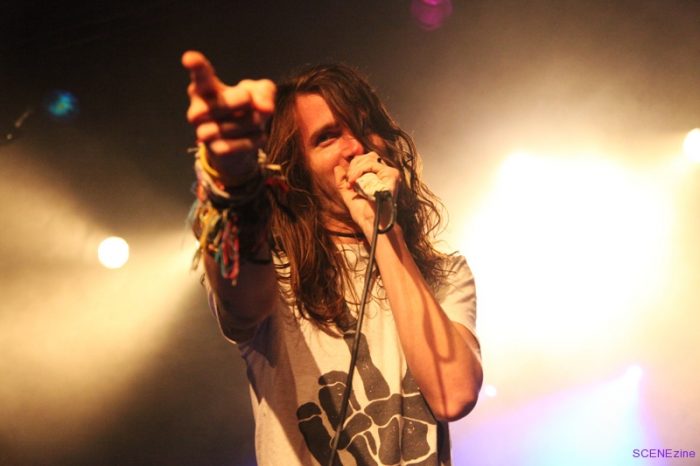 What beautiful summery type night it is in Sydney and i am making my way to the Metro as for Mayday Parade have arrived in town, on tour in support of their latest album Black Lines and they have bought with them The Early November. It is an early start for tonights performance and a very filled up Metro is looking very all ages indeed.

The Early November had done a great job of getting things warmed up, those of us old enough had headed to the bar in order of some light refreshment and eagelry awaited Mayday Parade to take the stage. Being very punctual Mayday hit the stage to a loud cheer and waste no time opening things up with Jersey followed by new track Keep in Mind, Transmogrification Is a New Technology.

Mayday Parade’s music is filed with such great hooks and melodies of pop punk goodness that when played live every one could not help but bop and move along even the parents doing their best just pretend i am not here impressions were really responding to what was being played along with those loyal up front singing and clapping on every track and those filling up the Metro all the way up the back and the sides man it was packed in there and such a good sight too see and hear.

This may be the Black lines tour and we would hear some of the best tracks of the album like Letting Go and Let’s Be Honest and then its the more rocking number Hollow really pleased the crowd. But when they played 3 Cheers For Five Years it was like stepping back in time (11 years to be precise) we would sing along line for line, Too late, I’m sure and lonely Another night, another dream wasted on you Just be here now against me You know the words, so sing along for me, baby. Playing songs from A Lesson In Romantics and Tales Told From Dead Friends was such a good move the crowd really responded to these classics and all time favourites like Jamie All Over, Black Cat, When i get Home Your So Dead.

When lead singer Derek Sanders bought out the piano you knew we were about too witness something special first up he played the widely popular Stay but then he asked if we mind he play one more on piano and said ‘to fly across the world and play a sold out show and have every one singing your songs back to you is the best feeling’ another well done pat on the back for live music attendees in Sydney. The track was Miserable At Best and as he sang we sang and when he stopped we would carry the verse and chorus all the way through, it was a pretty awe inspiring moment of beauty’s to such a hauntingly sad track.

After such a moving performance the track closes out, the stage lights go black prompting an immediate audience response of feet stamping and clapping and a cry out to play it again. A mere moment would only haft to pass before Mayday Parade head back out promise to keep coming back again and again before ending the night with the fan favourite I Hate To be You When People Find Out, our night would end in a wash of mobile phones held high swaying back and forth with us all singing as one.