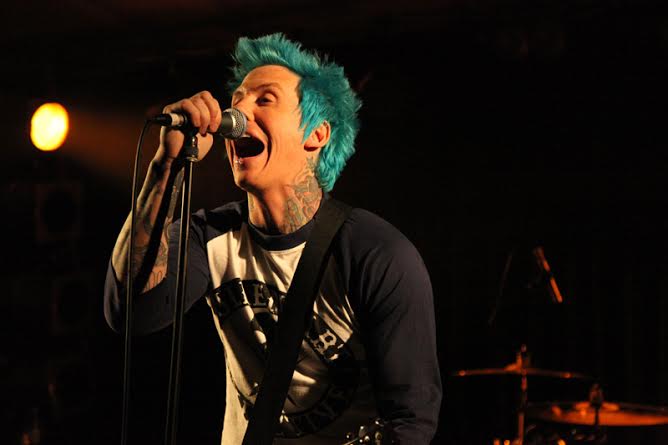 It has been a full on weekend of rocking and reviewing for this writer as he makes his way to his third review show of the weekend. Tonight is a double header of punk goodness the Post Hardcore sounds of Hawthorne Heights and the Pop Punk bliss of Mest at the Bald Face Stag Sydney.

Maybe Sunday isn’t the best night for for punk rocking as for the crowd wasn’t in the numbers i thought it would or maybe Sydney siders are holding off until the Saturday 24th show at MMRS (which i will be attending),MMRS is Sydney’s newest hot spot for Punk Rockers of all walks and you can find it at Cnr of City Road and Butlin Avenue, Darlinghurst make sure you head along you won’t be disappointed.

With If Only You Were Lonely in its tenth anniversary year Hawthorne Heights decided to play it in full. When a band do this sort of thing it either creates a setlist all mixed up or in track order tonight was track order. The album has three big hits Saying Sorry, This Is Who We Are and Pens and Needles and would you believe it they were the tracks that got the crowd singing the loudest but a bonus to this type of show is getting to hear songs that aren’t normally played by the band ever this was a case in point on the track Light Sleeper where we get the story and history of how the track came to be.

Lead singer JT Woodruff informs us that the track was originally written to appear on movie soundtrack “which we were very fucking excited about because shit like that just don’t happen in the small town where we are from in Columbus Ohio” he says, but the powers that be thought it had too much screaming on it so the band was told to take it out or they would pull it. Not one to comprise with their art Hawthorne Heights pulled the track and never really play it, but did tonight. Wow ! that is the sort of thing that live music lets you into, giving insight to your favourite band and the art they create.

When it came to the track I Am On Your Side  Jt said it was dedicated to Sienna Skies (amazing Sydney band if don’t know them then go do so) ‘Whom with out which we would be surviving on McDonalds’  we later are told that Sienna and Hawthorne Heights had toured the USA together and our country men had done us proud by impressing the Americans how much beer we can drink and how hard we party.

There is just no way Hawthorne Heights could leave us with out playing something from The Silence Is Black And White and they play both Niki Fm and Ohio Is For Lovers which i proudly sing loud along too but that wasn’t all they played a brand newie from their latest EP Hurt the track is called The Darkest Times and i think fans of The Silence In Black And White won’t Be disappointed by hearing this one live.

Next Up is Mest, let be up front about my love for Mest they are one of my favourite bands to listen too especially the self titled album and i am liking the new stuff from front man Tony Lovato’s new band London Falling which he also plays a few songs from during the set.

So the whole band couldn’t make it for this tour but there front man Tony Lovato could accompanied by some other fine musicians and thats fine by me.  Tony takes the stage hair is bright blue, this guy is still pop punk as fuck i dig it. There is no messing around as the first three songs are ripped into one after the other.

As the last of the first three songs is being played we sing  ‘heart break fake smiles two thousand miles’ , we jump around and dance to Hotel Room, Fucked Up Kid and Wasting My time it is like some 2003 dream for me as i get transported back in time and then it happens the music slows down a little as the opening of Jaded starts us off then it hits the chorus and we all jump up and down and almost hit the rooftop.

The sublime sounding Missing My Baby Tonight keeps things a little chilled, but the opening chords of Drawing board let out ‘wooo’ from the crowd. Saving the best for last i here the punk rock anthem of my life as i decide to give it all i got and sing my heart out ‘Up on the rooftop, Listening to punk rock, Nobody believed us, This could be our one shot, That was all we had…The nights that we wasted,Got us through the days that, Seemed never ending, Always in a haze but, We just didn’t care…No, we just didn’t care’, you the reader may not  know me but that song, wow that song just moves me like you wouldn’t believe infact it is a must in any soundtrack made of my life.

So whether you feel the same way or not about either of the bands i saw that night you can still get out there and catch them and have a real good fucking time in doing so, there are still a few more dates left on the tour, so  show your support and appreciation for live music and get out, oh yea if you can buy a T-Shirt from the band so they can afford to eat something better McDonalds on tour.