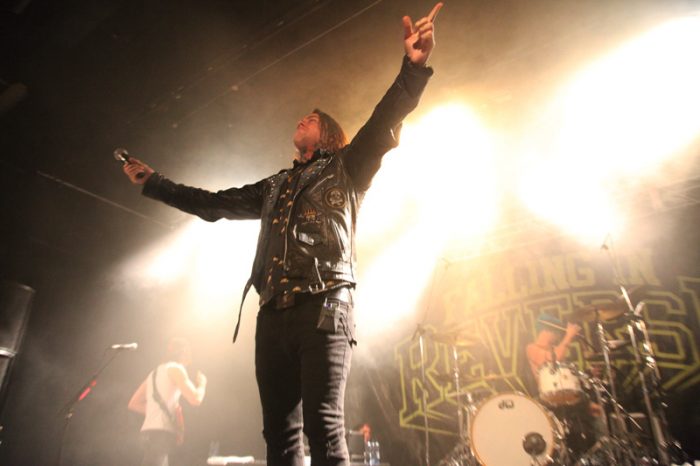 Falling in Reverse have bought their Count Rockula Tour to our great nations shores having already done shows around a few other states, tonight it is Sydney’s turn and let me tell you the Metro is looking real sexy tonight as i gaze out at the packed in tight crowd dressed to the nines in sexy short black skirts, stockings and there best look with make up on and great colourful hair.

As I emerge back from the bar and walk up the stairs the crowd is already changing for the band to come on.
The lights black out leaving us in the dark and out come four of the band members instruments in hand ready to rock once Ronnie hits the stage and it is fever pitch screaming as he wastes no time opening things up with God If Your If Your Above off the latest album Just Like You the track is even better live and its rap break down is one of the things  i admire about Ronnie’s ability to mix up his vocal style on songs.

One of the things that help make a Falling In Reverse live show or even studio album so good, beside’s their kick ass slick musicianship from which you get an impressive display of sound coming from the guitarists backed by the banging drums then mix this on top of heart felt lyrics amongst the screaming from their front man whom owns the stage with his absolute charisma and energy moving back and forth with strange dance moves. The band can’t even try to catch a breath between songs with out the fans screaming for Ronnie and more Falling In Reverse magic. It is just living proof of how good this band come across live and what makes this band a standout amongst all their pier’s a definite crowd pleaser.

Setlist wise they absolutely killed it offering up the best tracks from all their albums be it their latest offering with tracks like Rolling Stone, Alone or Bad Girls Club on which the crowd got wild. From Just Like You we would get Guilotine IV, Chemical Prisoner and Sexy Drug. Now every song was met with absolute enthusiasm that you would expect walls, mosh pits, jumping up and down and of course word for word sung back to the band. But it was when they went a little further back in time and played the self titled track from their early album release The Drug In Me Is You that things kicked off, mix in tracks Raised by Wolves and the real crowd pleaser of Tragic Magic and a real great time becomes an even greater time and if that wasn’t enough the covering of not just one but two Escape The Fate songs would really stand out as and become a live music you just had to be there moment.

The Sydney crowd would make every moment count tonight and really empress. There was no real encore as the band just played through with killer track killer track after killer track. One of the cool bits of the night would come at its close as Ronnie asked ‘who here is an asshole or who can be an asshole sometimes ?’ as we all pretty much raised our hands high the Falling In Reverse banner that had adorned the stage all night would be ripped down and reveal another one that read you are all assholes as they finished off with Just Like You. Ronnie would ask if we had a good night and then it was good night to a most impressive night of Falling In Reverse magic.