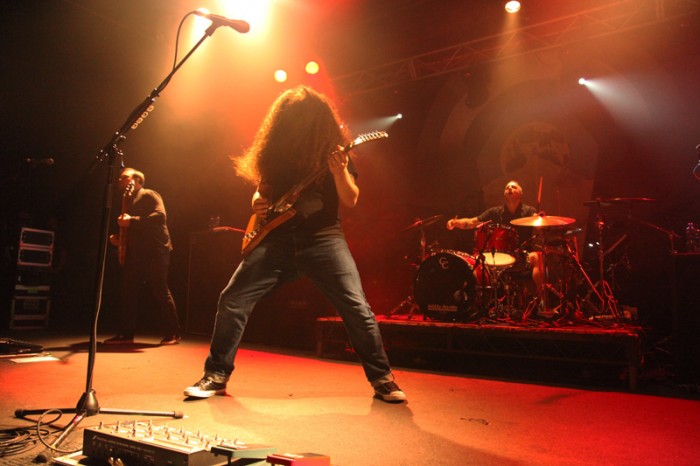 Hell YES ! i think to myself, Coheed and Cambria are playing tonight at The Metro Thearte in Sydney and i already know it is going to be freaking fantastic no doubt about it, i mean how couldn’t it not be an amazing band in a venue that size

Opening up the nights show was local lads Closure in Moscow who still draw a large crowd and they have lost nothing of there stage presence with such a long gap between albums. There genre defing sound still has its appeal as they belt out new tracks like The Church Of Techno Christ and old favourites like Sweetheart.

There was no sold out sign out the front of The Metro but surely you could only fit like no more then anoher two more people inside, it is packed, i try and find room on my favourite row but its all full i then proceed up to the very back too take it all in and then the dim lit stage of blue is before us and on stage is lead singer Claudio Sanchez and guitarist Travis Stever its just the two of them with acoustic guitars and they open with Ghost a soft gentle track from latest album The Color Before The Sun.

Then its right into the hard stuff a as red glow fills the stage and when the drummer Josh Eppard bangs it lights up and then we hear it the opening chords of In Keeping Secrets of Silent Earth: 3 the crowd roars in its middle part the mosh goes nuts we man our battle stations. moving seeminglessley into Blood Red Summer we all sing out with Wa Oh WA OooH Wa Oh Oh Oh Woah !

In total Coheed would play 6 songs from The Color Before The Sun (it did come in at number 9 in last years SCENEzine top albums for 2015). Latest single The Island went over well as did A favour House Atlantic but it was my favourite track from the album Here To Mars that just blew me away. This track, man i absolutely adore this track it leaves me with fuzzy feelings all through my body and just hearing it live, had me in awe.

You should have been there to hear us all cheer when they played No World For Tomorrow, So many voices in unison shouting Young Brothers and Sisters ! with our hands raised high clapping along to the beat. Claudio’s hair just covering his face the sway of the crowd, it was so hypnotic. You had the ever faithful huddled up the front there energy relentless even tho Coheed isn’t exactly a band that when the beat drops you go mental and slam dance but there they were like a wave in an ocean of humans all captivated by the music, the lights, the artistry of  the performance in front of them. We would all sing every line from old favourites to the new.

It is acoustic time again as a soft purple light washes over the stage.The ever amazing voice of Claudio fills the air as he strums the guitar and then boom the drums kick in and Coheed are finishing of the set with Peace from the Mountain. And that’s how it all ends they walk off, but we all know this isn’t the actual end, A piano plays its gentle keys pushing a beautiful melody and when its last note has been played. The Coheed ! Coheed! Coheed ! chants starts, but they don’t keep us waiting long as they come back out Claudio tells us they have had a good time ask ‘if we would like them to play a few more songs for us‘
Opening things up for the encore is the up beat, guitar driven You Got spirit Kid and we yell ‘no one gives a fuck who you are !’ this ends with a bit of a blues sounding solo strummed out on guitar from Travis
but this would soon give way to the banging of drums leading us into Everything Evil in which in the middle of we would get more awesome guitar mastery. If I wasn’t already blown by the set list then i was about too be as they had saved a big gun for last to finish us off Welcome Home, it is fucking incredible the epic gutitar work, the swirling hair, the flashing lights and our final sing along ‘one last kiss for you one last wish for before i hope you die’.

Coheed are completely accomplished musicians who sound even better live then at home. I have never walked away from a Coheed and Cambria gig thinking anything less then that was fucking awesome. Let me get a bull horn wake up the neighbourhood an shout go see Coheed live you won’t fucking regret it.

Check Out Our Interview With Josh Eppard

Catch Coheed And Cambria on the rest of there Australian Tour