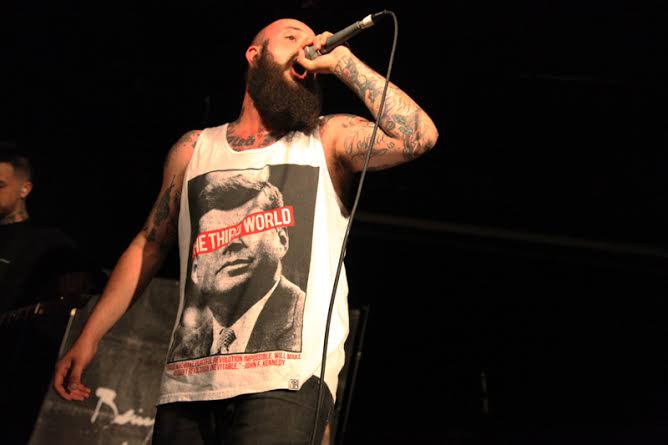 Being as an ocean are on their first headliner tour of Australia after already coming here for the past two and a half years. It easy to hear the appeal of this Californian melodic hardcore band as for their sound it gets even better live.

The house lights dim and the stage is black, coming through the speakers is some gentle relaxing sound that you know is going to explode into something heavy the anticipation builds you can feel the moshers getting ready like horse at the starting gate. The band are all onstage building things up but singer Joel Quartuccio is with the people up the front and when they get into the opening track Little Ritchie, he isn’t just content being up the front of stage I mean he is right in it amongst the mosh from stage left to right camera phones are out capturing every moment of the action. One of the best ways to open a show I have fucking ever seen.

The set is a mix of old and new with songs like The Hardest Part Is Forgetting Those You Swore You Would Never Forget and Dissolve getting played early in the set. With their spoken word style lyrics it can be easy to miss where messages of hope end and the songs begins. But before they play Death’s Great Black Wing Scrapes the Air Joel Quartuccio had this to say ‘we are all born with blinders on an we wear it like a fucking birthright we need to change it, our greed and our hatred which has driven us to disparity because we affect people’s lives across the world, who will never meet, now we can choose to keep the blindfold on or we can lift it but it’s up to you‘.

L’exquisite Douleur is one of my favourite Being as An Ocean tracks getting to see it live and hearing such passion an emotion spill on out through the speakers is truly memorable. As the songs words go on out into the crowd it then becomes energy in which we all feed of only to then to have our own voices being heard as we scream back the lyrics ‘your silence says everything‘ is honestly a special feeling that only being at the gig can give you.

It’s their last song and they thank us for coming out leaving us with a message that it doesn’t matter what kind of style of music you listen too and love there is zero judgement so take a look around and see the people in this room that can be your family. A blistering explosion of sound breaks out as we get into This Loneliness Won’t Be the Death of Me. Every crowd surfer knows it’s their last chance to go over and they begin to do so in waves, now having to avoid the lead singer who is finishing the set almost where it began down the front, on the floor with the fans this time walking all the way up the back climbing up onto a Cooper’s keg barrel. As the crowd gather round him it all ends with a back flip into the crowd as they carry him back to the stage. I have seen a lot of shows in my time all around the world and I am like wow that’s was Fucking cool.

The crowd let out the one more song chant and are only three chants deep when bam just like that they reappear and when asked ‘if we want to hear an old one?‘ we cheer and from Dear G-d they play Nothing, Save The Power They’re Given and then it is over after the show they all come out greet the fans and pose for photos it is what makes a good night with a fantastic band even greater.

Read our interview with Joel Quartuccio

Go Out and catch the rest of the tour