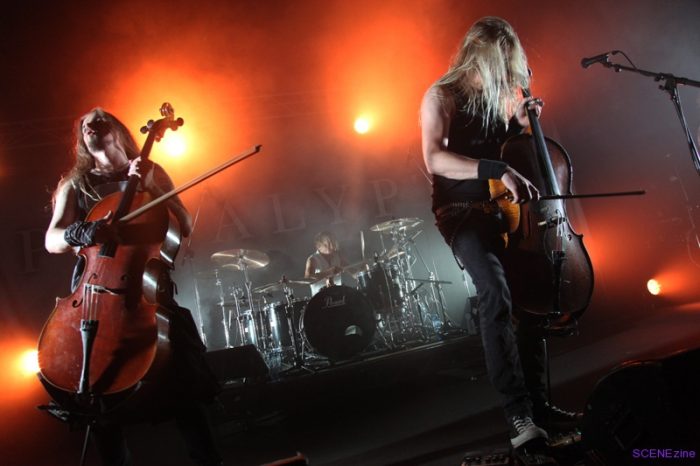 It is Saturday night and Apocalyptica have rolled into Sydney town bringing their Shadowmaker Tour to Australia, not since their last performance at Soundwave 2015 have i seen such intense hair flying and passionate cello action that seems to to fuse together the worlds of classical music & hard rock.

Main support tonight are local lads We Lost The Sea I must admit I have never had the chance to catch this amazingly brilliant band ever. So to hear their music tonight for the first time live was a real treat and let me tell you. Since there album Departure songs was released last year this band has been on the up and up and tonights performance of a Gallant Gentleman was spectacular if you haven’t caught this band live yet wait no longer go on and get out there and see them. It’s instrumental prog at it’s finest.

The Metro boards had swelled up with punters eager to get their air cello on, the lights go dim and out walk the musical metal maestro’s standing aloud and proud with their back drop covering the stage they open up things with Reign Of Fear followed by Quutamo. Touring for the first time with a lead singer (Franky Perez) really added something new for me to an Apocalyptia show the crowd really loved it and he has an amazing voice which was show cased on Grace which is usually sung by Corey Taylor.

The light show would dazzle you the crowd would sing along to songs that Franky wasn’t on stage for. The music would be so very freaking metal. As APOCALYPTICA rocked the Metro seeing them up there on stage swirling their hair, playing the cello with teeth holding one over their head and playing it, man it was absolutely insane.

Of Course when you go to an Apocalyptica show you expect to hear some Metallica and that we did as they churned out for us Master Of Puppets and later Seek And Destroy mix in some Sepultura with Inquisition Symphony and opening up the encore was Refuse/Resist. As classic and as loved as these tracks were by the crowd. I myself along with the crowd really liked the new stuff playing House of Chains and Riot Lights but it was title track Shadow Maker that for me ended up being a high light on the night with the crowd getting right behind it. Before the encore we were treated to another cover in Edvard Grieg’s In the Hall of the Mountain King and the whole night would come to close in spectacular array of lights and metal mayhem with I Don’t Care. Apocalyptica most definitely impressed us with their unique stage presence and electrifying sound that you won’t ever see or get from any other band there really is nothing quite like them. The final words of the night came from Eicca Toppinen “Apocalyptica will be back and that’s for fucking sure”.