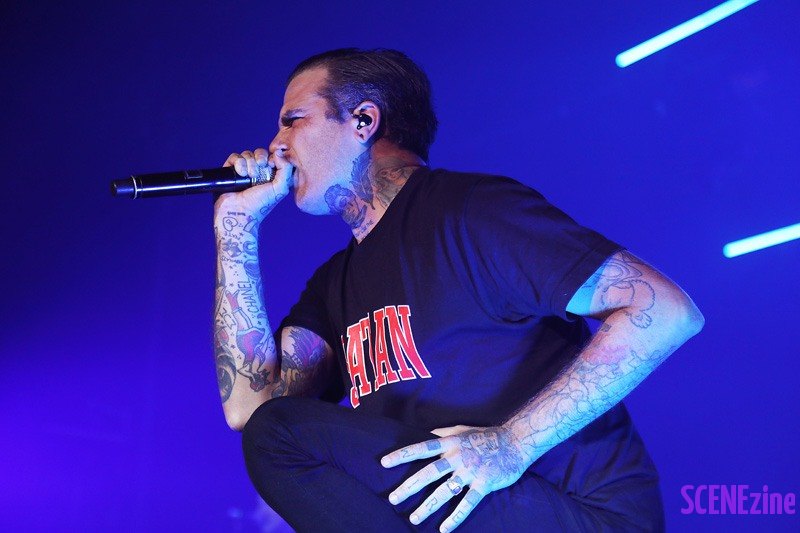 Pagan are a band that if you don’t know then you really should get to know. This Melbourne quartet play music that is in part punk with a metal edge and rock out on a the stage like the classic acts of old . Fronting this band is is Nikki Brumen who’s aggressive howling upon the mic is as impressive as her singing and in what is a signature move in their performance pours red wine all over herself and thrashes about the stage, it is spectacular to watch.

I must admit I was disappointed when I saw Crossfaith wasn’t doing a side show after appearing at UNIFY earlier this year, but disappointment turned into excitement when I saw that they would be playing the Hordern on this tour. Straight out of Osaka in Japan Crossfaith were well received by the Sydney crowd. Their energetic live set can only be described as wild and exhilarating, they have a unique sound that echoed loudly in every part of the Hordern tonight. I was absolutely loving every moment and am hoping to see these guys again some time soon.

Australia has shown much love for Underoath over the years and tonight was no exception with hands held high through out the whole set. Underoath fans showing their love with non stop jumping up and down and most importantly just having fun. The band know how to entertain and sound fantastic they deliver a healthy mix of past heavy hits with the new stuff thrown in.

With the first few acts done and dusted the room began to really fill up and it wouldn’t be long before the stage lights go out and in the dark the beating of drums begin, like an army ready to go to war The Amity Affliction march out on stage as the crowd roar and begin to clap in time, the stage then explodes in pyrotechnics and things open up with Drag The Lake.

From then on in they just kept building up the shows momentum as the band built upon the tracks that have made up their impressive career. The mosh got further and further out eventually reaching the outskirts enveloping every one the room until we were all just throwing ourselves up and down to the music all as one.

The first five tracks were all killer Ivy, I Bring The Weather With Me, All My Friends Are Dead and This Could Be Heartbreak and even though crowd participation was already at an all time high front man Joel Birch demanded more of us on D.I.E and sure enough piece by piece we sing out our bit. Shout out to drummer Joe Longobardi who was raised high above us and left alone to belt out a drum solo of classic rock/metal melodies.

There really was no stopping the motion of The Amity Affliction once they opened up the throttle it was full steam ahead, pumping the crowd over and over. Backing it up with dazzling light show and pyrotechnics they proved why they are one of best heavy bands we have ever produced. The set finished on Pittsburgh and for the encore they left us with a special acoustic performance of All Fucked Up which was just one big choir sing along.

Brisbane your up next and for their home state show they are taking things one step further having added additional support performances as part of Brisbane Festival’s 30th anniversary of Riverstage celebration SATURDAY SEPTEMBER 14. This show will be the biggest yet with the tour concluding in Melbourne Arena Monday September 16th.