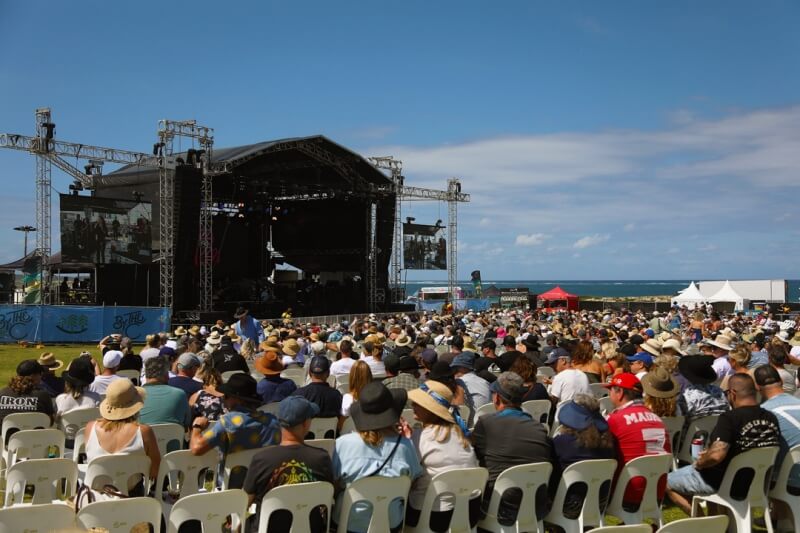 Well, it’s been a long time waiting, but at last live music festivals have returned. It was a beautiful sunny Saturday on the first weekend of March 2021. Thousands of Aussie music lovers made their way to Don Lucas Reserve at Cronulla Beach for the By The C concert. With the promise of a stacked all Australian rock lineup combined with the backdrop of a picturesque beach setting, it was a day to remember.

First on stage was alternative rockers Motor Ace who transported the crowd back to 2001 playing a set that included hits “Death Defy” and “Carry On”. This was a perfect start to the day, helping to wake up the crowd and set the tone for the day. After a short break, then Killing Heidi cranked things up a notch. Ella bounded around the stage, delivering her signature powerhouse vocals. Crowd favourites “Superman/Supergirl” and “Weir” had the crowd singing along as the band genuinely appreciated being back on stage.

The rock just didn’t stop as next up was Baby Animals, who gave a loud, ferocious performance. “Rush You” and “Early Warning” had the crowd in full voice displaying why Suzie Demarchi is one of the most badass singers Australia has ever produced. As the afternoon wore on, it was time for some acoustic chill music to relax to. That came in the form of the always handsome and laid back Pete Murray. His hits “So Beautiful” and “Better Days” provided a great soundtrack to the sunny afternoon as the waves crashed on the sand nearby.

As the sun was still glowing, it was time for James Reyne to deliver some Australian beer drinking classics. “Reckless” and “Boys light up” had everybody with a beverage in hand in full voice. Just as the sun went down, the stage lights came up, and it was time for Icehouse. Getting to witness Icehouse live is something special, and Iva Davies sounded better than ever. With so many memorable moments throughout their set, it was truly impressive. Standout songs were “Electric Blue” and “Crazy”, but “Great Southern Land” really embodied the spirit of the entire day.

By The C at Cronulla was an absolute success and a testament to how much live music has been missed and how talented our homegrown musicians are. The event organisers are to be commended as all covid safe precautions were in place, and whilst it may have been different to have an entirely seated festival, the crowd were just happy to have live music back. Enjoy some photos of the day below by our photographer Christian Ross.