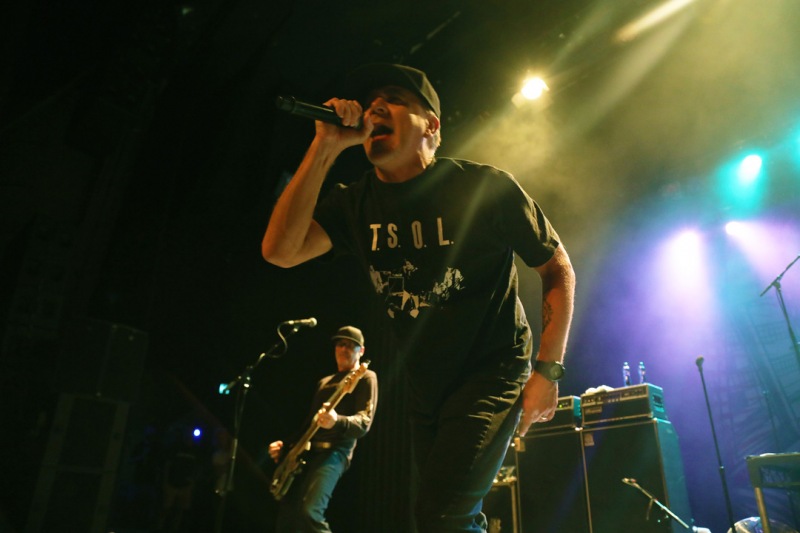 Sydney is in or some major SoCal punk rock action tonight as Hermosa Beach legends PENNYWISE are down under in order to celebrate the Straight Ahead album’s 20th anniversary. Touring with them is another Californian favourite of ours, Strung Out but first up it will be Swedish punks No Fun At All.

I could not tell you the last time I listened to a No Fun At All record let alone seen them live, it has been quite some time, not just for me but for all their fans. As they take to the stage the early crowd have stepped forward filling up the blank space at the front, they open with Spirit off their latest album Grit. From the opening track it was a total fun for all fest, the die hards singing every note, the mosh growing with each track as more bodies piled in the centre. Old school track Should Have Known going off like dynamite. There was absolutely no doubt Australia had love for this band and them for us as they finished off the set with Master Celebrator they promised we will see a lot more of them soon.

Strung Out are a band that just are synonymous with having a good time and tonight was no different, they blast onto the stage in full ready to rock mode. Straight out the gate we get Velvet Alley and Rebellion Of Snakes. Front man Jason Cruz doing his thing up the front giving fist bumps to the fans and venue security as they came over the barrier. The set was small but jam packed with hits, each one enticing the crowd to jump higher and higher. The energy was great and before they got of the stage they hit us with four of the best, Bring Out Your Dead, Firecracker, Daggers and Matchbook. The crowd immediately calling for an encore well those who hadn’t run off to the bar for re-hydration, it was a short powerhouse set that really got the crowd ready and sweaty.

When it comes to album celebration shows we are not talking the same ole story in the Enmore tonight as Pennywise walk out to a heroes welcome they have a message about the times we live in and how relevant opening track Greed was back in 2000 and now even more so in 2020. Straight Ahead is an album that is as just as good today as it was 20 years ago, its 17 tracks of pure punk rock energy with a driven message about standing up for yourself against the establishment. That message was heard loud and clear in the packed out Enmore tonight. The crowd moshing away to tracks that say it all Victim Of Reality, Alien, American Dream, My Own Way and One Voice were all killer no filler. You had literally mosh pitters surfing atop of the shoulders of others and the rest would come crashing over the barrier it was beautiful in all its chaos. Front man Jim Lindberg had many an important message to deliver between tracks but one most important is that you can’t trust governments or cops but the real heroes are firefighters which saw a huge applause from the crowd. It is worth mentioning that at all shows there is A limited edition tour poster with all proceeds going to support the wildlife rescue efforts of the Australian bushfire disaster.

As the album set finishes with Badge Of Pride Pennywise waste no time fucking around with the walk off encore bullshit, they take a breath and incite things back off with Fuck Authority and since it is a Straight Ahead Anniversary show it was fitting they played the Aus/NZ bonus track from that album, Down Under, a track Jim says was recorded in honour of their southern hemisphere fans. The night was coming to a close but not before we hear Society and of course the inevitable Bro Hym which as always saw the stage invaded by the fans in one giant sing along, its forever something special to witness at their shows. Australia shares a real love affair with these Californian bands and them with us there is no doubt tonight’s show will be dubbed the punk rock show of the year and it’s only February. From the time No Fun At All opened their first note you had a show that was fast furious and raw. Powerhouse sets that were uncompromising and relentless, jam-packed with attitude, speed, creativity, and energy, FUCK YEA !!!!