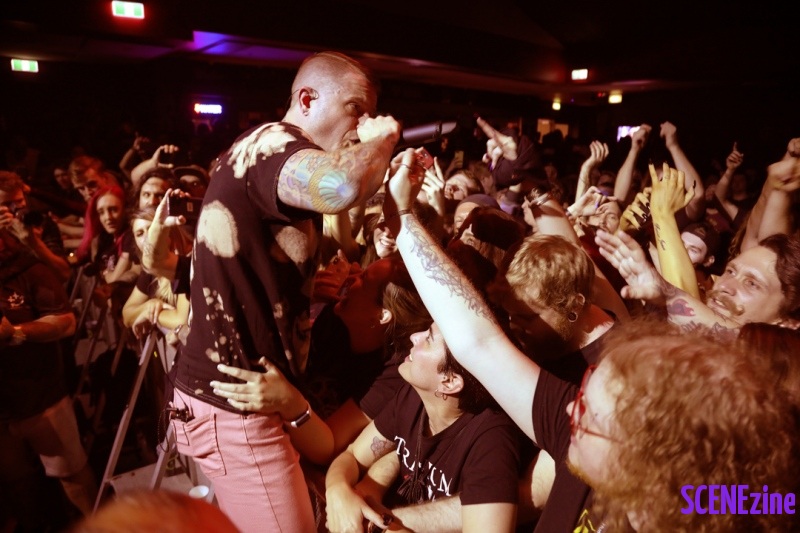 It’s been way too long since the riff crushing, Metalcore godfathers ATREYU last hit our shores for a headline tour. Now the band has finally returned to Australia in 2020. They have already crushed it in Brisbane now it’s Sydney’s turn and time for The Manning Bar to witness what has been dubbed a tour to remember, read our pre tour interview with Guitarist Dan Jacobs

The Manning bar is one of the best venues in Sydney making it easy to see the band from anywhere in the room. The stage setup brings a sense of the band being right on top of you, up front and close.

As Atreyu came out you can feel the atmosphere in the room being like an energy waiting for release that release came with the anthem opening track The Time Is Now. And then second track Right Side Of The Bed saw things amp straight up and stay that way all set. This is a band that do loud and live so well and in this venue you can’t get a better combination. Brandon Saller’s pounding of the drums can be felt right in chest, the power of the guitar combo from Dan Jacobs and Travis Miguel just gets hard wired into the brain. Frontman Alex Varkatzas screaming on the mic leading the vocal charge from an ecstatic crowd, each track unleashed upon us, just saw the crowd lifting higher and higher. Remember how I said the venue lets you feel as though the band is right there with you ? That was true on Ex’s and Oh’s as guitarist Travis Miguel casually exits the stage, walks into the mosh and has circle pit ensnare him, this is the intensity and insanity at an Atreyu live show. Their light show was an arena level display inside the Manning tonight.

Brandon stops mid set to tell us that yeah it’s been some time since they toured Australia but he makes it loud and clear that by us turning up and filling these room in each state the way we have, they will be getting back round to touring down here a lot fucking sooner. The setlist was filled with highlights form their career The Crimson and Bleeding Mascara two definite crowd pleases but the huge highlights came in there Bon Jovi cover You Give Love a Bad Name along with the cheeky rendition of Whitney Houston I Wanna Dance With Somebody as which Sydney are credited with executing flawlessly. But the show stopper for me had to be in what felt like a second encore Brandon sits at the front of stage with just Dan Jacobs to lead the crowd in an awesome karaoke rick roll moment of Never Gonna To Give You Up. The solidarity between crowd and band never stronger and before they are officially ready to call it a night they have four words they wish to make sure we scream and they are LIVE ! LOVE ! BURN ! DIE !

Not many bands can touch ATREYU in a live aspect as they absolutely deliver a raging assault on your senses that is aural and visual. Back in 2005 I saw the bands first ever Aussie tour at The Gaelic Club in Sydney. Sure these days there are a lot less emo fringes but the band is still furious as ever. Seeing Atreyu live is one big party so fellow Aussies don’t miss this Mosh Fest!

Tickets on sale now from: https://silverbacktouring.com.au/atreyu2020/