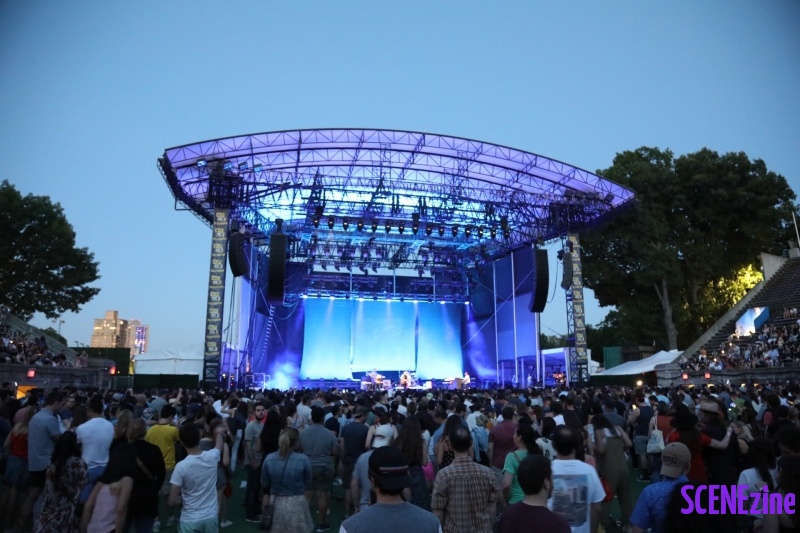 New York’s City’s alternative radio station, ALT 92.3, host the 2019 Summer Open festival. The festival take’s place out in Queens at the historic Forest Hills Stadium former home to the U.S Tennis Open and Davis Cup. The stadium now plays host to a wide range of musicals acts and has in its time seen The Beatles and The Rolling Stones play along with more recent acts such as Mumford And Sons. SCENEzine ventured in on, day two of the festival and took in all the wonder and beauty of this unique, American musical experience.

The beautiful Forest Stadium really played the perfect host to such a warm sun filled day of craft beer and amazing tunes. The soft grass perfect place to plonk down with your mates chow down on some culinary delights. I’m a sucker for the Big Mozzarella stand really love my self some cheese on a stick. On tap you had as selection of local beers brewed in the burrows IPA , Pilsner, Lager, i found the Summer Ale went down best.

Inside the tennis arena turned musical amphitheater there were the echoes of giant chorus sing alongs to the days sensational acts. Performance from Fitz and the Tantrums had us all doing the Handclap, Chris Carraba front man of Dashboard Confessional stunning us with his voice as we screamed infidelities. But for me it was the indie folk darlings The Head and The Heart who closed out the day that best fit the tone of the days events their heart warming sound just the perfect way to end the day with huge sing along moments from the opening hit All We Ever Know and latest hit Missed Connection to the show ending Rivers And Roads.

The Summer Open is really a lush day out filled with good beer and great music set in a venue like nothing else in New York City it is impressive, with a state-of-the-art stage and amphitheatre for sound. The Forest Hills Stadium is outdoor concert experience that is much more welcoming and intimate in setting, i highly recommend heading out of the city and seeing any of the numerous live music shows the Forest Hills Stadium puts on.