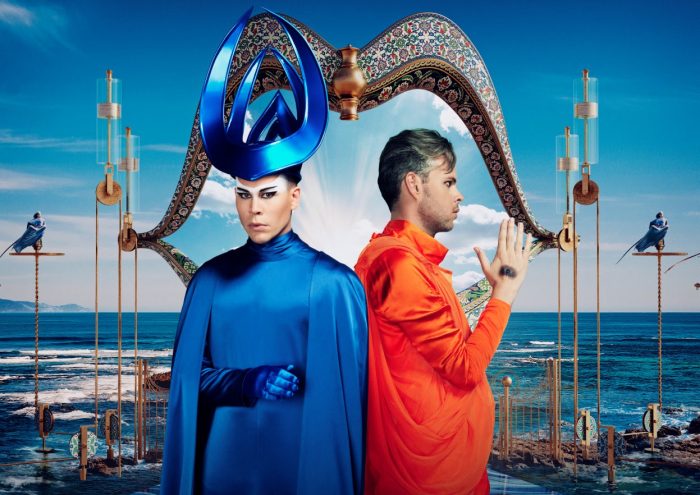 Empire Of The Sun unveil their long awaited third studio album today.  From the undeniably catchy first single ‘High & Low’, to the punchy, sweeping vibe of ‘Way To Go’, and the sublime ‘Friends’, it’s an album showcasing the duo’s dreamy pop talents.

Through the waterfall of dreams, beyond the white light of the ice curtain lies a lush, green world where childlike innocence and ancient wisdom are one. Enter, Empyrean pilgrims, the jungle paradise that marks the third incredible age of the Empire of the Sun.

“There was an image we talked about very early on with this record, before we wrote the title track, Two Vines, and that was this image of a modern city overtaken by jungle, almost like mother nature taking back the planet,” says Nicholas Littlemore, the co-pilot with Luke Steele of this fantastic vessel of electro-futurist sound and vision.

“We always saw Empire as a movie,” Nick says. “The whole concept was based around childhood fantasies; being in bed and staring at the posters on your wall, whether they were monster movies or outlandish rock stars or pieces of art.

“We always wanted to be one of those posters on a child’s wall that had so much imagination locked into it, a kind of invitation that pushes you over the edge into dream world. With this record, it’s time to take that next step.”

Launching today is the interactive experience, ‘Empire Yourself’.  Fans simply upload their own picture, choose their props and meld seamlessly into the vibrant landscapes of the album art – for more: ‘Empire Yourself’.

EMPIRE OF THE SUN – TWO VINES – OUT NOW