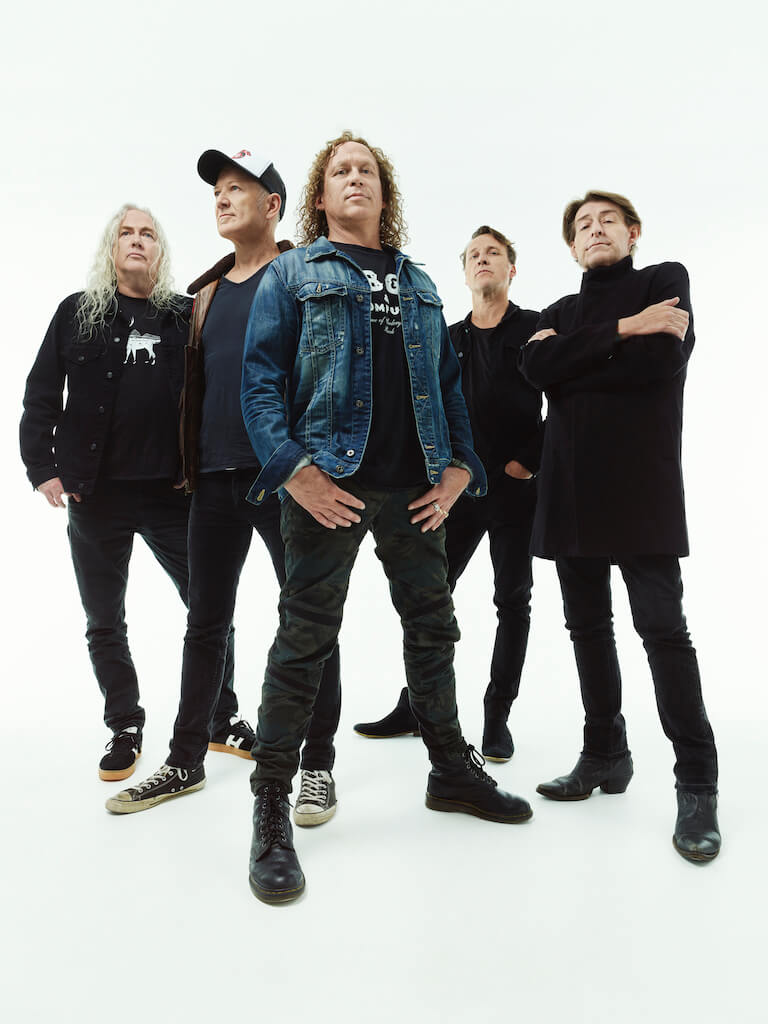 Back in 1991 Aussie rockers, The Screaming Jets released their debut album All For One. The album catapulted them to the top of the charts with singles including “Shine On” and their signature anthem “Better”. Now fast forward to 2021 the band are celebrating the 30th  anniversary of All For One by re-recording the album and hitting the road to play the album in full. We caught up with The Screaming Jets front man Dave Gleeson as he reflects on their debut album.

SCENEzine Firstly congrats on celebrating thirty years since the release of All For One. Does it really feel like that long ago?

Dave Gleeson In some ways, yes but when we were re-recording it vivid memories flashed back of the eleven days we spent in paradise studios in Sydney. Midnight Oil, Inxs and The Angels records were on the walls. It was eleven days of craziness that recorded that album.

SCENEzine With the new re-recording of All For One, how different will it be from the original? Were you trying to get the drumbeats exactly the same?

Dave Gleeson Well Brad Heaney was an absolute freak on the drums during the first two albums. Having said that Cam McLinchey who’s our current drummer he absolutely smashed it. Some songs he added a little bit to like on “sister tease”. Most of the songs have stayed faithful to the original recording but then a couple of them over the years of playing live has grown into different types of songs. Like “shine on” is a fairly different arrangement than what made it onto the first album. “Come on” has an extra lead break in it, so we had a bit of fun with some things that made it a little bit different.

SCENEzine Recently Taylor Swift re-recorded one of her first albums. Are you worried that she stole your idea?

Dave Gleeson
(laughs) Absolutely, Taylor Swift is taking notes out of the Jets book. A lot of bands have been doing it especially for bands that signed when we did. I know that for us we signed with Roo Art records who were then sold to Sony BMG they retain the rights to all our master tapes if they still exist. We’ve been through different record companies so even if we were able to locate the master tapes we still wouldn’t own them. So with this, we actually own the whole recording. It’s not like it’s going to outsell the original one but it’s nice to know that any of the money goes to the band rather than getting sucked up in the record company machine.

SCENEzine Do you know why when All For One was released the USA version had a different album cover?

Dave Gleeson Yeah it was kind of just to put a bit of their own local stamp on it. There were huge problems with that. The problems that went on between the United States and Australia with the jets were many. I’ll give you one insight before we released the album Roo Art said we aren’t going to put “F.R.C” on it. We aren’t going to have the worst swear word ever recorded put on an album. Me being twenty-two said no “F.R.C” then no album that’s how it goes. So we had a huge fight and in the end, I won.

Then the very first thing they released in America of The Screaming Jets was “F.R.C”. Now anyone who knows anything about anything knows that if you drop the C bomb in America it’s the worst thing you can do. It’s worse than calling someone a fuckwit or anything like that. So me in my inimitable fashion went around America trying to explain to them how it’s a different usage in Australia. If your mate is funny he’s a funny cunt if he’s happy he’s a happy cunt. They weren’t having a bar of it. So it was a very strange relationship we had with Roo Art records. We signed a seven album deal worth a million dollars by the seventh album which we never reached, it was all fun and games with the record companies that’s for sure.

SCENEzine If you go to any Screaming Jets show you’ll have a very angry crowd if you don’t play “F.R.C”. Did you realise it would become a cult fan favourite?

Dave Gleeson Well I was a very angry young person back in the day. I’d written it specifically about the two leaders of Queensland at the time Joh Bjelke-Peterson and Russ Hinze. Once we got in the studio we recorded it with all of the guys from Mortal Sin, The Choirboys, Baby Animals and a couple of the guys from The Radiators. We got in the studio and screamed Fat Rich Cunts for about fourty minutes, it was a very cathartic experience (laughs). It just became something that had to go on the album.

SCENEzine I guess you can’t not talk about the album and not mention the huge hit “better”. What’s the feeling like for you playing that song live?

Dave Gleeson It’s nuts, the fact that we are in the entertainment industry and when you play a song that is such a touchstone for people. If the crowd was going christ this again you’d re-think it. But every time you start playing that song the crowd goes nuts. Anytime the crowd is screaming and cheering for you is always a highlight of the show for us as well as the crowd.

SCENEzine
Do you have any memories of shooting the video for “Better”?

Dave Gleeson
Absolutely, I couldn’t believe it. I thought we had made the big time. There must have been thirty people on the crew including guys painting a fourty footwall backdrop. We had ten tons of red river sand brought in so that they could recreate the outback. We had an animal handler there, pyrotechnicians and even catering. Prior to that, the only video we had done was for “C’Mon” which cost us five grand. We just got up the top of a hill at Moore Park with the band, two crew guys and two cameramen and made that clip. So to then be making the “Better” film clip I still remember calling my old man and saying it cost about ninety grand to make. I heard silence on the phone until he said you know the house cost thirty-five thousand bucks. The producer had worked with Ozzy Osbourne and Faith No More previously so we definitely felt like we were on the way.

SCENEzine You’ll be hitting the road from July touring to play the album in full. Are there any tracks from the album you are stoked to play?

Dave Gleeson Yeah well it was only after the album came out we played all of the songs on the album during the set but we didn’t play them in order. So that’s going to be something that will be fun to do. Strangely with the last track “The Only One” well you get to the last track sometimes and think yeah that’ll do. Whereas this time I think we really nailed that song. Dare I say it but I think it may have got better attention this time than the first time. They really are touchstones for people; they’ll know exactly what song is coming after the song before. It should be very exciting to play them all in order live.

SCENEzine Over the years you have played alongside some big international bands. Are there any that were really special to you?

Dave Gleeson
Velvet Revolver was unreal because we were huge Stone Temple Pilots and Guns n Roses fans. So to have those guys all on the same stage was amazing. They were really nice to us, the last night of the tour we were hanging out with Matt Sorum, Duff and Slash. Drinking wines and Matt Sorum was trying to buy a two million dollar artwork off the wall in the hotel we were staying at (laughs). We were sitting there thinking wow that’s success.

Also Kiss were really nice to us, Paul Stanley is an amazing guy. We’ve been very lucky that the bands we played with have always treated us with utmost respect. Having said that there was a band called King of the Sun that we nearly had a mad blue with in kings cross one night. It’s been a great ride.

SCENEzine Lastly we managed to catch your acoustic show at Hard Rock Cafe in Sydney last year. How have you enjoyed playing sit down acoustic shows?

Dave Gleeson
Well, you certainly learn the importance of live performance and what it means to you when it’s ripped mercilessly from your grasp. The last twelve months I’ve learnt probably another hundred songs. I said to someone the other day I’d sing with Frente if they asked me too just because I miss playing so much.