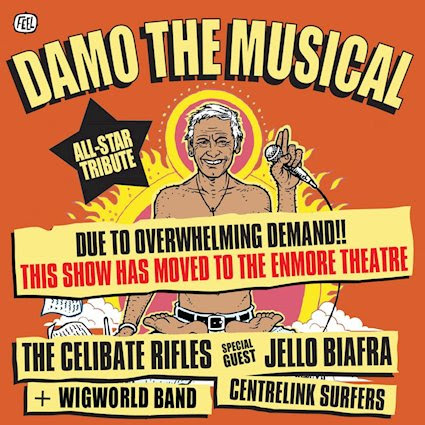 Due to overwhelming demand we are pleased to announce Damo the Musical – the life-size tribute to Damien Lovelock – has been upgraded from The Factory Theatre to the Enmore Theatre. Same date, same times: Sunday 22nd September 4pm- 8pm. Tickets on-sale now via enmoretheatre.com

Leading the tribute of course will be The Celibate Rifles, the band Damien’s fronted for 39 years. Rifles members past and present will share the stage with a host of guest singers including Ben Brown (The Hellmenn), Evil Dick (HiTS), the ageless Jeff Duff and mega-fan Jello Biafra; frontman for the Guantanamo School of Medicine and founding member of the Dead Kennedys.

“Talk about returning to the scene of the crime! Damien opened for me the time I sold that building out for spoken word.”  – Jello Biafra

Also performing on the day will be the Wigworld band, paying homage to Damien’s solo years and the albums’ It’s A Wig, Wig, Wig, Wig World and Fishgrass. The Wigworld Band will feature…

Damien’s friends from cover band world the Centrelink Surfers will also appear performing some of the material that Damien loved to sing and the songs that inspired him.
Plus testimonials, visuals and even more special guests.