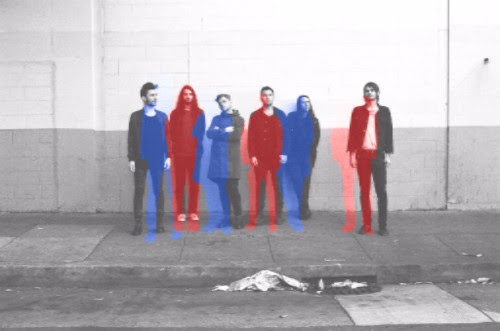 Pre-order Fear Of Life at iTunes and receive Charged as an instant grat. The video for Charged was directed by Timmy Lodhi and features vocals from Kristina Esfandiari  (AKA King Woman, Miserable).

Creative Adult are touring Australia in September for Weekender Fest ’16, I Love Life Fest with more tour dates to be announced.

After many hiccups and delays and a painstaking half-year writing and recording, Creative Adult have put the finishing touches on their sophomore Run For Cover LP Fear of Life, which exists somewhere between abstract art and pop music. During that time, the quintet – vocalist Scott Phillips, guitarists Michael Bingham and Anthony Anzaldo, bassist Mike Fenton, and drummer James Rogers – pieced together 15 songs in the studio, with only 9 making the final cut. “We spent less time practicing songs over and over and more time just forming rough skeletons so when we went into the studio we had a ton of material to play with.”

The tracks on Fear of Life were influenced by the likes of Oasis, Spaceman 3, and Explosions in the Sky and the songs – two of which clock in at over eight minutes – build slowly and are rife with texture and an emphasis on heavy guitars. The band’s five members have known each other their entire adult lives, growing up playing in bands together and working together in a tailor shop, altering clothes for many years which resulted in the record’s non-musical influences: “Brutal Punishers, The San Francisco Bay, Design, Friendships and Awkward Conversations.” Each song’s lyrics were treated as “an attempt to delineate how it feels to be alive at the moment with respect to all emotions.”

PLUS MORE DATES TO BE ANNOUNCED!