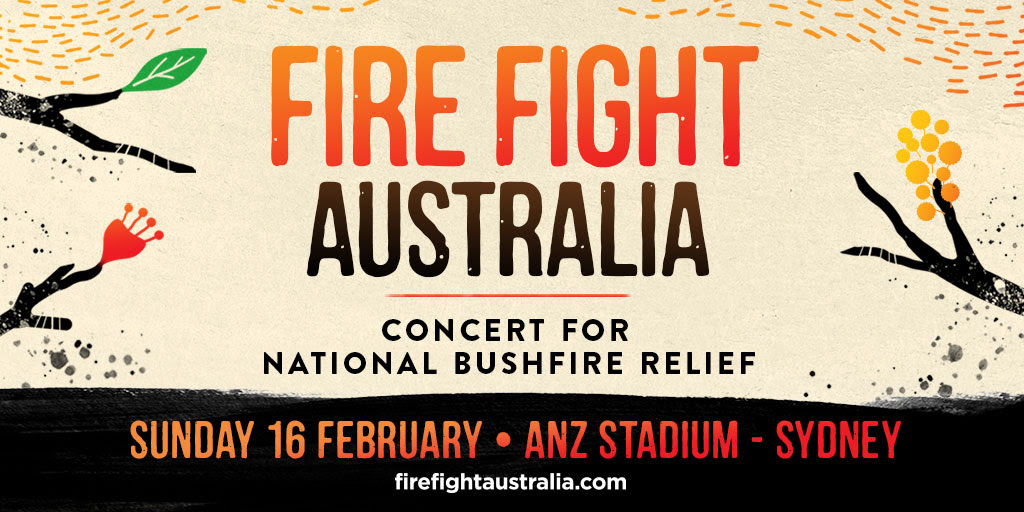 TEG Dainty and TEG Live have announced that the official FIRE FIGHT AUSTRALIA (#FireFightAustralia) t-shirt is available for pre-order today at www.firefightaustralia.com.
The limited-edition tee costing $39.99 (inc GST & delivery)  will be available to purchase online in Australia, New Zealand, USA and Singapore as well as in selected Cotton On stores in Australia.

100% of the proceeds from the sale of the tees will go directly to organisations dedicated to national bushfire relief efforts.
FIRE FIGHT AUSTRALIA’s official merchandise partner Cotton On has produced and donated the t-shirts to help music fans everywhere show their support for bushfire relief while commemorating the momentous SOLD OUT concert.
TEG CEO Geoff Jones said: “We are very grateful to Cotton On for their generosity in producing these exclusive t-shirts for FIRE FIGHT AUSTRALIA.

“Buying a FIRE FIGHT AUSTRALIA tee lets fans show their support while helping those who have been affected by the ongoing national bushfire tragedy.”
Cotton On Brand Director Bianca Ginns said “We are incredibly excited to get involved and partner with Fire Fight Australia for what is going to be an amazing event in support of a truly great cause.

All of us at Cotton On have been devastated by the effects the bushfires have had across our country but are  proud to see how many of our customers and team members have rallied to support the communities and people who need it most.
For us, supporting Fire Fight Australia is another way we’re rolling up our sleeves, getting around our mates and trying to make a difference to all of those who have been impacted by the fires.”

The concert will be hosted by writer, actor and comedian Celeste Barber, who has raised more than $50 million towards bushfire relief through her own record-breaking online appeal.
Please follow and like us: