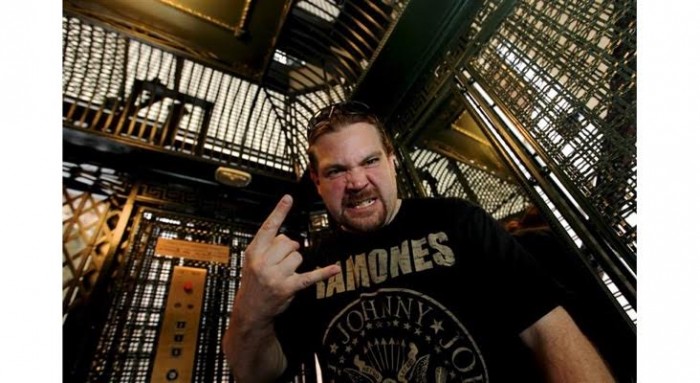 Australian PR Manager Chris Maric, works with and represents some of the biggest metal and rock labels & promoters in the world, including Eleven Seven, Century Media, EVP, Metal Blade, Season Of Mist, Relapse, UDR; Live Nation, Destroy All Lines, Direct Touring, Wild Thing Presents and many more and also looks after a string of local Aussie bands from King Parrot to the newly formed.

Next month Chris is heading to Europe for the summer festival season, attending Download in the UK and Hellfest in France where many of the acts he reps will be performing.

Before the festival fun begins though, Chris will be undertaking an epic 265km bicycle ride from London to Castle Donington & The Download Festival between June 8 and 10 with the Heavy Metal Truants, in the name of several children’s charities.

Last year Heavy Metal Truants raised a massive £72 000 GBP / $142 000AUD!
This year they hope to eclipse that and have a bigger team than ever before!

In short, it’s about the brother and sisterhood of Metal uniting around some very worthy causes – in this case, Nordoff Robbins, Teenage Cancer Trust, and Childline – to raise money for children who need it most.

Chris will be joining a fantastic team of people from all across the music industry – agents, managers, promoters, other publicists, record labels, media organisations, and artists alike plus members of the public who have signed up for the gruelling challenge.

Chris has a fundraising page set up and his target for the campaign is about $2500AUD (£1300GBP).

If you are able to spare anything at all to help Chris reach his goal, please do. You can donate via this link
www.justgiving.com/fundraising/chrismaric

Chris will post updates along the way during the ride to his social media pages so you can see the pain in his body but the glory in his face.
Personal Facebook, Maric Media FB, Twitter & Instagram

Check out this awesome YouTube video of the 2015 event to see just what all the riders are in for!

It won’t be easy, but then nothing worthwhile ever is. There will be hills, heat, and hangovers, and Chris has been in training for weeks already to face the task ahead, The Heavy Metal Truants are convinced that if there’s any community out there who’ll answer the call to help kids in need, it’s people like you!