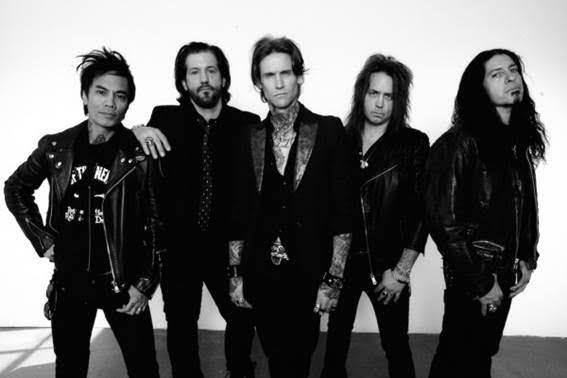 One of rock’s great bands, Buckcherry will return to Australia and New Zealand this March. Led by Josh Todd, a man who personifies rock n roll and anchored by guitarists Keith Nelson and Stevie D, drummer Xavier Muriel and bassist Kelly Lemieux,  Buckcherry will deliver a night of straight up good time rock and roll. It’s going to be loud, it’s going to be sweaty, it’s going to be awesome!
Adding even more Awesome to this tour are a carefully selected bunch of hard rocking local acts that have proven themselves time and again for delivering the goods and getting everyone’s juices flowing.
Starting in Auckland, Unleash The Kraken will do exactly that and set the tone for what’s to come. Their hybrid of glam and nu metal they’ve christened Glu-Metal will have the room bouncing instantly, and the five women of Blue Ruin will set everyone’s ears on fire with their pop punk grunge sound.
In Melbourne, the bluesy swagger and riff fuelled rock of Palace Of The King will be complimented by
Electric Dynamite, a band who’s debut release was titled Hair.Denim.Sex.Metal. Sums things up perfectly!
When the tour hits Brisbane, Electric Dynamite will be primed to do it all over again and one of Australia’s
most iconic hard rock bands, The Poor, are making a long overdue return to the stage!
Sydney fans will have heard the rumble from a thousand kilometres away a few days before and will be at
the mercy of Palace Of The King setting the scene on a Friday night.
Finally in Perth, Buckcherry fans will be treated to the classic 70’s rock power of the all-female  Legs Electric who wear the influences of of their heroes proudly on their sleeves.  Joining them are three  piece progressive rockers
Opia who’s cyclonic wall of sound will be felt all the way to the back of the room.
Buckcherry and these amazing support bands will hit town soon.. oh yeah, you want it.
TOUR DATES
Sunday, March 13: Powerstation, Auckland (with Unleash The Kraken & Blue Ruin)
Monday, March 14: 170 Russell, Melbourne (with Palace Of The King and Electric Dynamite)
Tuesday, March 15: Max Watts, Brisbane (with The Poor & Electric Dynamite)
Friday, March 18: Metro, Sydney (with Palace Of The King)
Saturday, March 19: Metropolis, Perth (with Legs Electric & Opia)
Tickets on sale NOW!
killrockstar.com.au/tickets/buckcherry