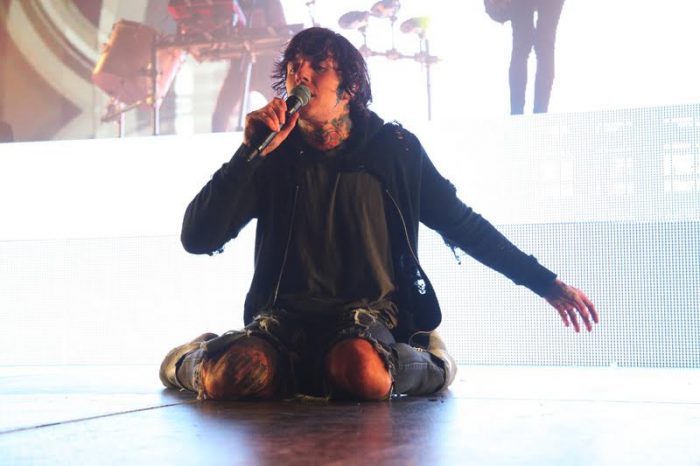 It almost feels like a mini festival is taking place at the Horden Pavillion In Sydney tonight with the triple bill of hardcore. First up we have 68 which is fronted by Josh Scogin former front man from Chariot and Norma Jean after is metalcore maestros Architects and for the main event Bring Me The Horizon.

68 were an awesome fit to kick off the night. The duo had such an impressive sound that it was really hard to believe it was coming from only two guys. Josh and Michael gave it their all and even included a little banter with the crowd between tracks. It was great to see BMTH having 68 on the tour as it’s a nod to how beloved Josh is in the hardcore punk rock scene.

Let me just start off by saying Architects were nothing short of amazing this band has never let me down live ever and tonight was no exception. Their light show was spectacular as the lights would burst in time with the drumming adding to the fever and frenzy of the music.

Opening the set list was Nihilist followed by These Colours Don’t Run, before playing new track Phantom Fear front man Sam Carter asked Sydney not to let him down and don’t worry Sam we didn’t. It was directly from the kick in, those at the front and in the middle were whipped into a frenzy by the guitar driven assault. Fan favourite A Match Made In Heaven would be a highlight of the setlist that left many clapping along and stomping their feet some would give it there absolute all while others would rock back and forth.

Recently Architects guitarist and keyboardist Tom Searle passed away as he had lost his battle with cancer so before finishing off the set front man Sam Carter delivered a big heart felt speech about their fallen brother and how important it is that they keep touring and playing the music he helped create that us fans love so much. The crowd would respond with a massive round of applause and then the set would close things out with Gone With The Wind and in the middle the crowd would sing with such passion and beauty the track deserved.

It is time for the main event, the drum beat kicks through me I feel like a Viking on ship getting ready for a raiding party as we clang our metal together getting ready for the frenzy. When things start off they start off with a bang ! Quite literally streamers explode from the roof above covering us in paper rain the pyrotechnics spew forth from the stage, there is a massive visual display covering the whole stage that acts as a second stage with band members on top of it. On the stage below are the rest of the crew, front man Olly Skyes clearly states that there is no standing in the middle or the sides now push it back and in drops the beat to Happy Song from there latest album That’s The Spirit and with that a wall of death collides, wow you just know what kind of show you are in for tonight.

Bring Me the Horizon would go on to play and epic 15 song set featuirng classic crowd favs like Go to hell For Heavens Sake,the lights would flicker the crowd would sing back point their hands at the stage and bounce up and down. Things would get old Skool on Chelsea Smile Sykes asking right before it if we even know what a cirlce pit is  ? Our response was to open up two and show him, yeah Sydney does and then right before its big finale he stops and ask us to all sit down and just like that a room full over 4000 people crotched down and then with a 4 3 2 1 they are back up to their feet with fury. The smoke machines would billow out and the whole Horden would be  jumping. But just god dam that video back drop would prove to be so spectacular through out the whole set its visual display adding to the impressive light show.

I swear when I walked into the Horden it felt already full and the sold out sign was on the door outside but as the set progressed more and more punters would gather on the floor and fill up the room with their enthusiasm and energy and you could tell by the look in their eye they were going no where.
Those hoping for more of there old stuff over the new should be happy with a set list that included the two tracks mentioned above as well as The House Of wolves, Antivist and Shadow Moses if there was ever a time to tear down the Horden it was on that track. Those of us who really love the new stuff like myself were more then happy as Bring Me The Horizon would play in total 8 new tracks from Thats The Spirit including Follow You and Avalanche. The melodic vocals would fill up the Horden beautifully and having the crowd sing every word back would be a real highlight.

I love it when a band touches on the real issues that face so many of us out there in the crowd and you can tell they have been where you have been as lead singer Olly Skyes speaks about the battles we all face with depression and how it’s like we are Sleeping Walking. This is one thing live music allows you to have a shared experience with a room full of strangers and puts you face to face with the artist that helped create the piece of art you found helpful to get through bad times.

Time does fly when your absolutely killing it up there on the stage and with a decimation to the haters they play Throne this would prove to be the best song of the set in my opinion as the already filled to capacity Horden floor would clap along and mosh the fuck out as they finished off the set.

Our inevitable one more song chant would break out the stage would stay dark our anticipation would build our screams would get louder our clapping more thunderous then stomping from the stands. The band take the stage the noise builds and then out of Olly’s mic come the truest of words we had longed to hear all night I wouldn’t hold my breath if i was you cause i’ll forget but i will never forgive you don’t you know don’t you know true friends stab you in the front. Next up we pull out our phones and hold them up in a dazzling array really lighting up the place for Oh NO. All good things must come to an end and tonights end came in the form of Drown it was electric as peopel all over the place gave it their all and would be leaving the Horden with a smile from ear to ear, as for many of us have just witnessed the gig of the year.