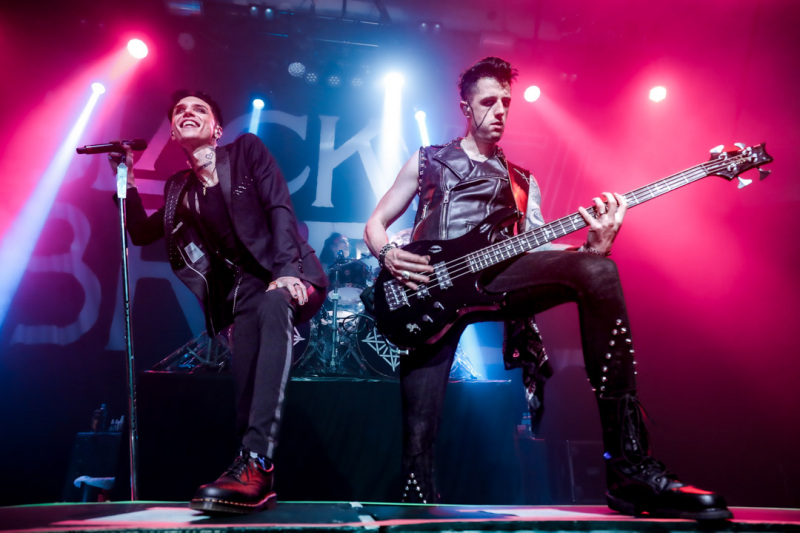 Well it may be tradition for a groom to wait for a bride to arrive… But in the case of Australia, we have been patiently waiting eight years for Black Veil Brides to return, so Aussie fans can continue their gothic romance.

Originally planned for June 2020 after some covid setbacks and rescheduling, tonight in Sydney it’s July 2022, and the tour is finally happening. It’s a cold winter’s Saturday night in Sydney and pouring rain but that won’t dampen the spirits of the legions of Black Veil Brides fans descending upon the Roundhouse.

Next up the moment that everybody in attendance had been waiting for. Screams from the crowd were at fever pitch as first drummer Christian Coma got behind his kit. Then joined by long time guitarists Jinxx and Jake Pitts, and newest member Lonny Eagleton on bass. The screams got even louder as vocalist Andy Biersack bounded onto the stage with a devilish grin kicking things off with “Faithless”.

The band are celebrating the release of their newest album The Phantom Tomorrow so it only seemed fitting we would get to hear some newer tracks live. That came in the form of “Crimson Skies” and “Scarlet Cross”.

Throughout the night, BVB gave us some absolute crowd favourites like “Rebel Love Song” and “Wake Up” that had the entire audience singing their black hearts out. The set even included a real deep cut “All Your Hate”, taken from their first album. With the last song of the set being their biggest hit from the same album “Knives & Pens”.

But after making us wait that long, surely that wasn’t going to be the end. The band returned to the stage for a three-song encore. First playing the fast paced “Legacy “ from their second album Set the World On Fire. Next was “Fallen Angels” that had everybody screaming and shouting along. Then appropriately the set ending with the bands anthemic hit “In The End”.

Tonight had everything you’d expect from a Black Veil Brides show; blistering guitar solos, thunderous drums and rockstars wearing warpaint. Sydney fans were left with their hearts on fire as they faded into the night.