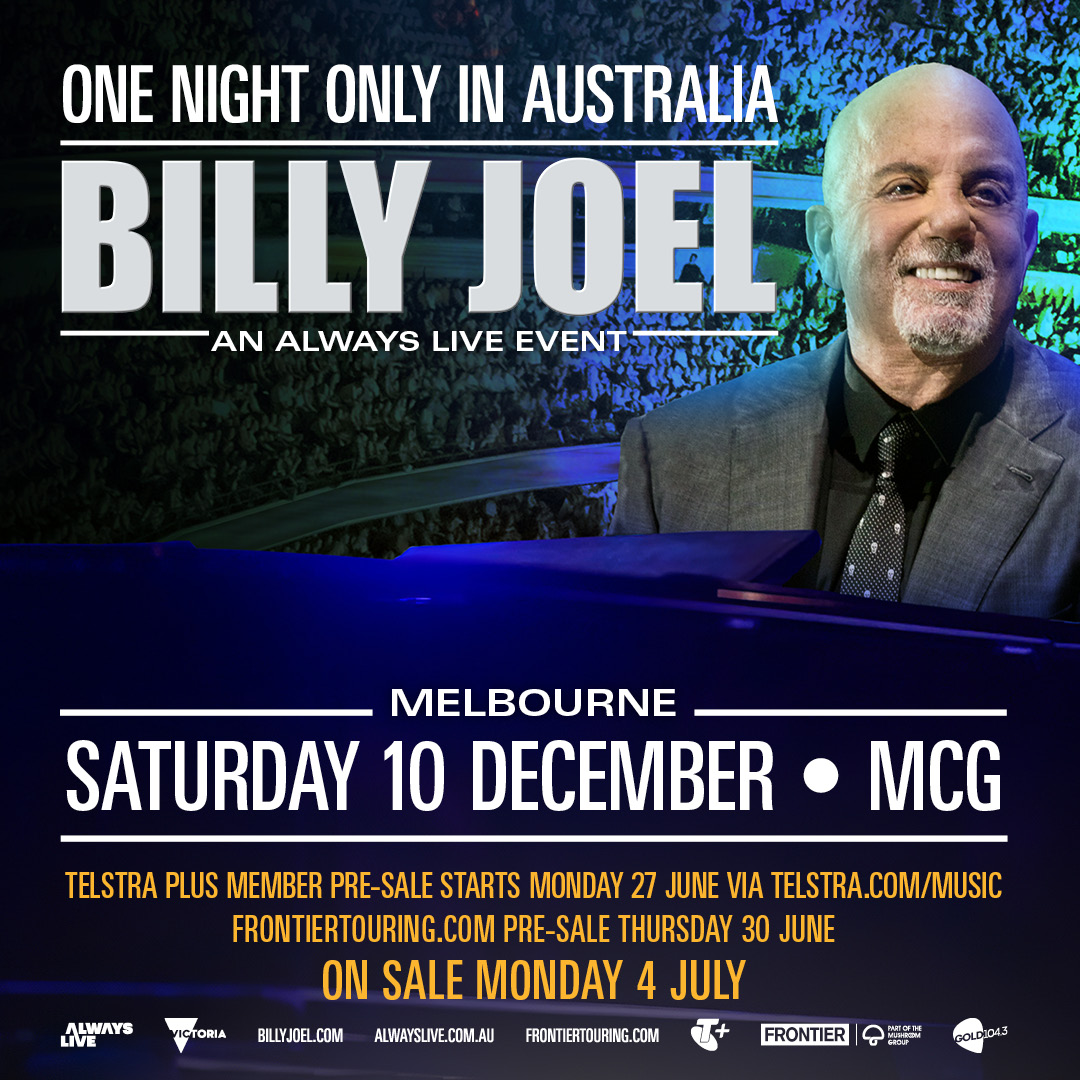 Frontier Touring, the Victorian Government and ALWAYS LIVE are thrilled to announce one of the greatest singer/songwriter/composers of modern times, Billy Joel, will perform one night only in Australia on Saturday 10 December, with a history-making performance at the iconic stadium Melbourne Cricket Ground (MCG).

An artist who requires little introduction, Billy Joel is one of the biggest concert draws in the world. Having sold over 150 million records and scoring six GRAMMY® wins from 23 nominations, Joel ranks as one of the most popular and respected entertainers in history – the sixth best-selling recording artist of all time, and the third best-selling solo artist. Tickets to this exclusive concert – Joel’s first live performance in Melbourne in 14 years – will go on sale Monday 4 July (10am AEST) viafrontiertouring.com/billyjoel. Frontier Members can access the Frontier Pre-sale, which starts Thursday 30 June (11am AEST).

Telstra Members can also get exclusive access to the Telstra Plus Member pre-sale, which starts 10am AEST Monday 27 June via telstra.com/music

Performing one Australian show only in Melbourne’s most iconic stadium, the concert is presented in partnership with ALWAYS LIVE, a state-wide celebration of contemporary live music supported by the Victorian Government through Visit Victoria.

Billy Joel’s anthology has soundtracked the lives of millions, his impeccable musicianship and transcendent songs recognised worldwide. Inducted into the Rock & Roll Hall Of Fame in 1999, Joel received The Kennedy Center Honors (one of the USA’s top cultural awards) in 2013. In 2014, he received both The Library of Congress Gershwin Prize for Popular Song and the once-in-a-century ASCAP Centennial Award – the latter presented to American music icons in recognition of their incomparable accomplishments in their respective music genres and beyond. In 2016, the Library of Congress selected ‘Piano Man’ for preservation in the National Recording Registry for its “cultural, historic, and artistic significance.” ​ He’s the recipient of numerous other awards, including a Tony (for Movin’ Out, a Broadway musical based on his music), MusiCares Person Of The Year, and an inductee in the Songwriter’s Hall of Fame.

Revered not just by critics and fans but also by fellow musicians, Joel’s songs have been covered many times, each version a fascinating insight on his impact and lasting influence.

Frontier Touring, the Victorian Government and ALWAYS LIVE are thrilled to welcome back the inimitable Billy Joel for this exclusive, once-in-a-lifetime stadium event. Don’t miss this magical performer, live at the MCG!