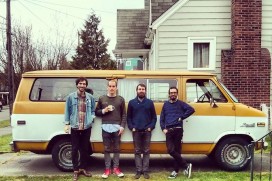 The first single, ‘Lose Control’ is straight off Mujeres’ third full-length record, Marathon, due out later this year. Lose Control showcases Mujeres’ dirty, winding and venomous riffs, combined with their signature tight drum fills as they howl along like a runaway Western mine cart; a jet-fuelled ride, wailing past dark spirits in the middle of the night.

In contrast B-side, ‘I Wonder’ is downright saccharine in its sentiment with an infectious harmonised croon. I Wonder will also be found on Marathon, however in an almost completely different arrangement.

Word on the streets of Barcelona is that they’re bloody blistering live; so if you’re still deciding on that winter escape to the north…

Lose Control will be pressed as a limited 300 copies and the first release for both Digestation Records in Australia & USA and Galgo Dimamante in Spain.

The Spanish quartet met back in 2007 at film school, where they started off writing soundtracks to their various film projects. Releasing their first demo tracks in 2008, Mujeres was more of a reason to hang out, but it has been their engaging live shows that have seen them crop up on major European festivals including, The Great Escape, Primavera and extensive tours through the USA and Europe.

While the band is Spanish, their lyrics are in English, making their songs more accessible and ridiculously catchy. They wear their influences, well and produce their own diverse interpretation of ’60s garage, psychedelia and country. The band have been compared to the likes of Black Lips, The Velvet Underground and Jacuzzi Boys.