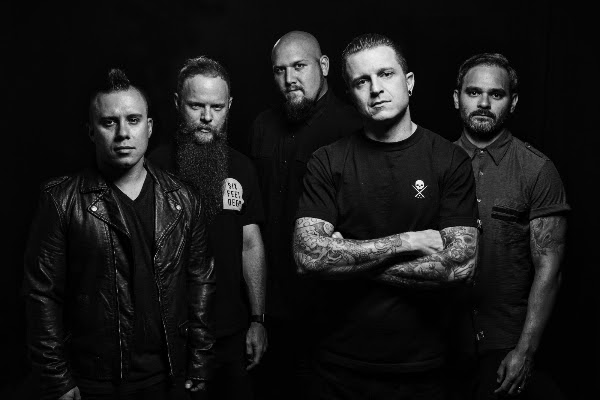 A fire requires only one match. Sometimes, it can be struck in the oddest of ways, but once those flames spread, it’s impossible to contain. In 2014 after a three-year hiatus, the embers started to collectively glow again for Southern Californian metal trailblazers Atreyu.

Guitarist Dan Jacobs planted the first seed, individually calling his band mates and urging for a meeting. “The time away from it helped all of us gain perspective”, vocalist Alex Varkatzas explained. So the group began writing in the Orange County rehearsal space, quickly tapping into the spirit millions of fans fell in love with, but harnessing their newfound wisdom along the way.

Watch the result of this inspired revival in the video for title track Long Live which dropped over the weekend. It’s an incredibly dark video and a perfectly engaging accompaniment to the long awaited release of new material.

Drummer Brandon Saller said, “This is my favorite video we’ve ever created. We were fortunate have our own Porter McKnight at the helm with the art direction and video.”

“I’m so pumped to show this video to the world,” added guitarist Dan Jacobs. “We’ve worked very hard on this record and video, especially our own Porter McKnight, who directed it, so words can’t express how excited we are to share it with everyone. It’s by far the most epic video we have ever made and the face-melting level is on 11. Warning: Uncontrollable head banging will occur.”

Atreyu solidified their reputation as group as trendsetters when their 2002 debut Suicide Notes and Butterfly Kisses dropped. Its follow-up in 2004, The Curse, became a genre classic moving over 450,000 copies and seeing the band blossom into a worldwide phenomenon. Their third opus A Deathgrip on Yesterday would match that success and even debut Top 10 on the Billboard Top 200, a feat also accomplished on Lead Sails and Paper Anchors in 2007. To date, the group has moved over 3 million records worldwide and sold out countless shows .

Long Live, Atreyu’s triumphant return, will land with Australian audiences on Friday September 18. Fans are suitably prepped for the release following the band’s Australian visit as part of Soundwave’s 2015 lineup.
The pieces have fallen into place , the fire has been stoked and the flame is roaring. Long Live Atreyu!