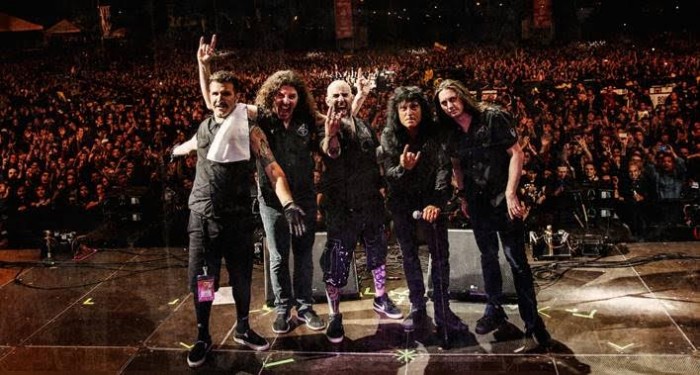 ANTHRAX have debuted the video for the song “Blood Eagle Wings” which can be seen below:

Talking to Rolling Stone recently on the set of the video for “Blood Eagle Wings” — from Anthrax’s new album, For All Kings — guitarist Scott Ian makes some bold claims regarding the track. “I think it’s our masterpiece of a song,” he says. “It’s the biggest, coolest thing we’ve ever written.”

The song is nothing if not ambitious — a multipart eight-minute epic featuring dramatic tempo changes, Ian’s intricate riffs and vocalist Joey Belladona’s soaring hooks. And the grisly video, directed by Jack Bennett, is equally imposing. The clip features a skull-faced king presiding over a draconian society built on torture, torment and murder. A protagonist, played by James Duval (known for his roles in Donnie Darko and Gregg Araki’s Teen Apocalypse Trilogy), initially resists the carnage but eventually succumbs to his own graphic fate, inspired by the song’s title. The video concludes with the king surveying a modern cityscape — a clue as to the song’s meaning — and a final surprise featuring two unexpected faces.

“Any great city, whether it’s London, Rome, Paris, New York, Los Angeles — these cities are alive because of how many people were killed to make these cities what they are, how much blood was spilled over time,” says Ian of the theme of “Blood Eagle Wings.”

“We created this torture chamber, sitting below this horrible king’s hall,” says Bennett of the video’s setting. “This guy gets to play with his toys and look through the grate in the floor and see this group of people that he’s essentially crushing. The idea is that this power is built on top of these people. It’s brutal and there’s a lot of amazing torture gags happening, but it all serves this concept that progress is brutal. Civilizations progress in a way that is violent.”

For All Kings, Anthrax’s 11th LP and the follow-up to 2011’s outstanding comeback effort Worship Music, is out now via Nuclear Blast. The band is on tour throughout the spring in Mexico, Central and South America, and Europe, with select U.S. festival dates in between.