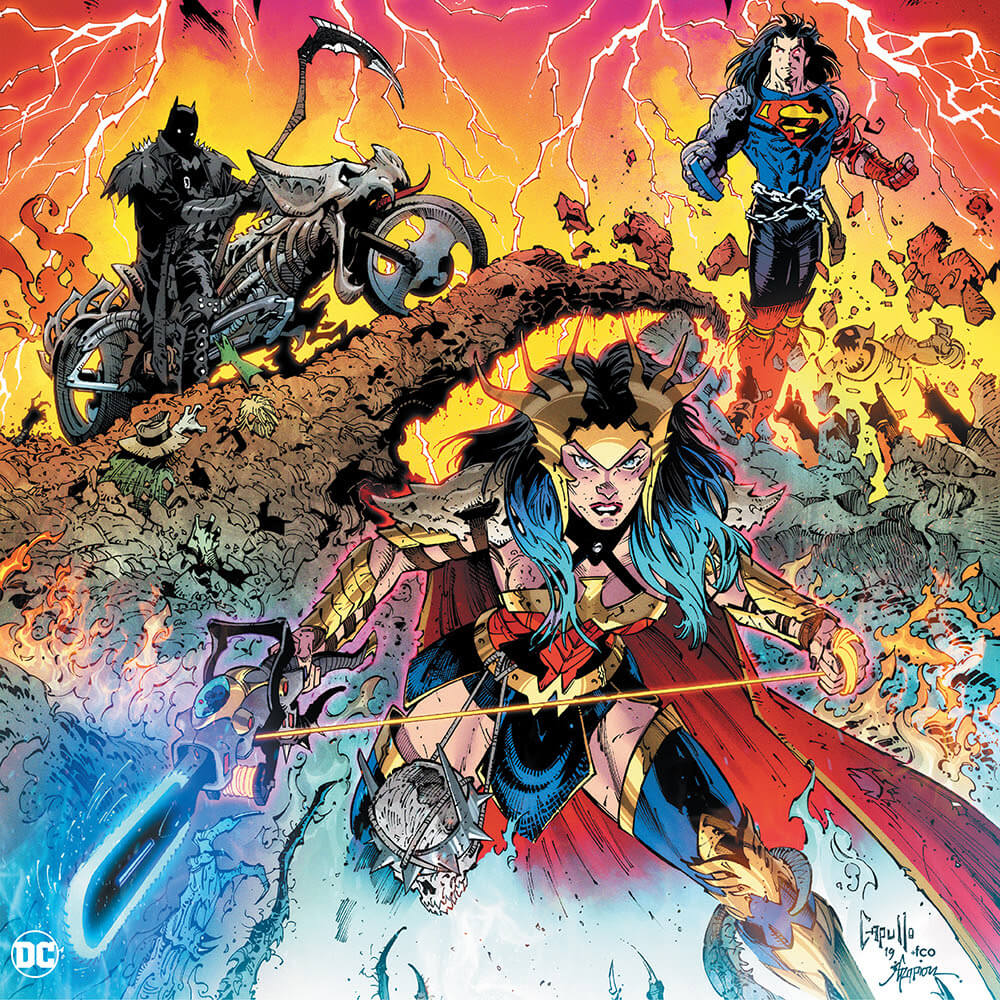 DC Comics and Loma Vista Recordings today announced the Dark Nights: Death Metal Soundtrack. Executive produced by Tyler Bates (“Guardians of the Galaxy,” “Watchmen,” “John Wick”), the soundtrack will be released digitally on June 18th, 2021, and physically on July 16th, 2021. Just as the lauded DC “Dark Nights: Death Metal” series isn’t the typical superhero storyline, this musical counterpart isn’t the typical superhero soundtrack. Acclaimed composer Bates here unites an array of artists across various genres—including Mastodon, Denzel Curry, Manchester Orchestra, Chelsea Wolfe, IDLES, and Soccer Mommy (full tracklist below)—forming his own musical super crew to create a first-of-its-kind companion piece of original music, which adds a further dimension to the acclaimed series through a multimedia experience including custom limited edition comics, videos, and more. Mastodon’s album-opening buzzsaw “Forged By Neron” is out today and the lead single sets the tone by name-checking a demon lord of Hell who appears throughout the series. “We are super excited and honoured to be part of the Dark Nights: Death Metal Soundtrack! We’ve all been fans of DC Comics and the Batman universe since we were kids, so it really means a lot for us to be able to add something to that world,” says Brann Dailor of Mastodon.

All artists involved took a hands-on approach with Dark Nights: Death Metal Soundtrack, contributing songs—and in the case of a few, collaborating together for the first time—inspired by the text that depicts a hellish Earth twisted beyond recognition, wherein the Justice League is at the mercy of the Dark Multiverse and a diabolical Batman Who Laughs. The soundtrack is available to pre-order now on digital download, CD, and 2xLP—with exclusive Superman, Wonder Woman, and Batman vinyl variant covers, 11 limited edition character trading cards, and more: HERE.

“This soundtrack and motion-comic series was made by fans of comics, for fans of comics and music,” enthuses Bates, who is beloved for his previous soundtrack work on several of the most influential superhero/graphic novel films of modern times. “‘Dark Nights: Death Metal’ is next-level storytelling by two incredibly talented artists in Scott Snyder and Greg Capullo. The visual aspect of this comic is entirely compelling, and resonates throughout each song on the soundtrack.”