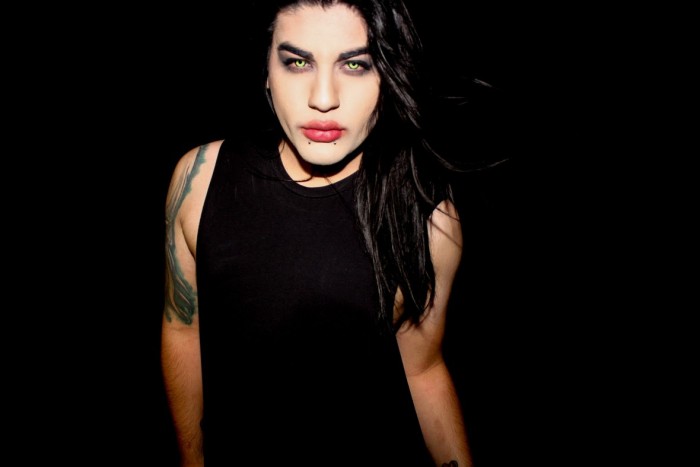 Former American’s Got Talent season 7 semi-finalist Andrew De Leon has signed with Standby Records and will release his upcoming 3-song EP “Dark Tales” digitally via iTunes, etc on 8/21. The release will serve as a teaser of what fans can expect from his upcoming LP, which will be released in 2016.

The Kyle., TX based singer-songwriter first caught the attention of the public after his eye-raising audition aired on the NBC juggernaut 2012. Clips of his audition have been viewed more than 42 million times.

“My name is Andrew, and I’m going to sing.” Overnight, Andrew De Leon, a 19-year-old makeup artist and theater student from Kyle, Texas, went from total obscurity to one of the most talked-about acts of the 2012 season of America’s Got Talent. Previously, the shy teen in black leather and metal spikes had only sung at home for his own enjoyment. That night in Austin, he stood on stage and wowed the studio audience and judges with a powerful rendition of the soprano aria, “O Mio Babbino Caro”.

Since then, clips of his audition have been viewed more than 42 million times on YouTube. “You’ve got an amazing voice, and YOU are an individual,” said judge Sharon Osbourne. “You are great” said judge Howie Mandel, adding, “Marilyn Manson does an aria.” An equally strong performance during the “wild card” show and a rapidly growing fan base propelled him into the semi-finals, where he received a standing ovation. Author Ann Rice tweeted: “Andrew De Leon — what a voice. And he did it all on his own, singing in his room.”

Since then, Andrew has been hard at work developing his unique musical style, composing, recording, and performing across the U.S. In 2013, he released his first album, “Black Lights”, an eclectic mix of pop, soft rock, goth opera, and classical tracks. His voice ranges from the silky tenor of “Counterfeit Lover” to the chilling operatic soprano of “Vampiro”.

Andrew performed mostly as a solo act, but after the success of his first album, he has been joined by Hunter Fisher (lead guitar, composer) and John Paul Grasso (guitar), with other musicians coming in as Andrew’s signature sound continues to develop. Andrew’s first live performance with his band was at the 2014 Austin Vampire Ball, and they have been invited back for 2015. “I bled onstage,” said Andrew of the special effects in his 2014 performance, where he demonstrated his horror-movie makeup talents. He hopes to incorporate his love of theater and film making into his future endeavors, adding a visual element to the lyrics he writes and performs.

Andrew’s 2015 EP “Dark Tales” demonstrates his evolving style, which blends elements of alternative rock, metal, classical, goth, and symphonic rock. He describes the title track as heavy and dark. Other tracks range from sensual and intimate to deep sadness.

Andrew sums it up with this line from “Dark Tales”: “I warned you from the start it won’t be the same, now that I’ve let you in this monster can’t be tamed.”