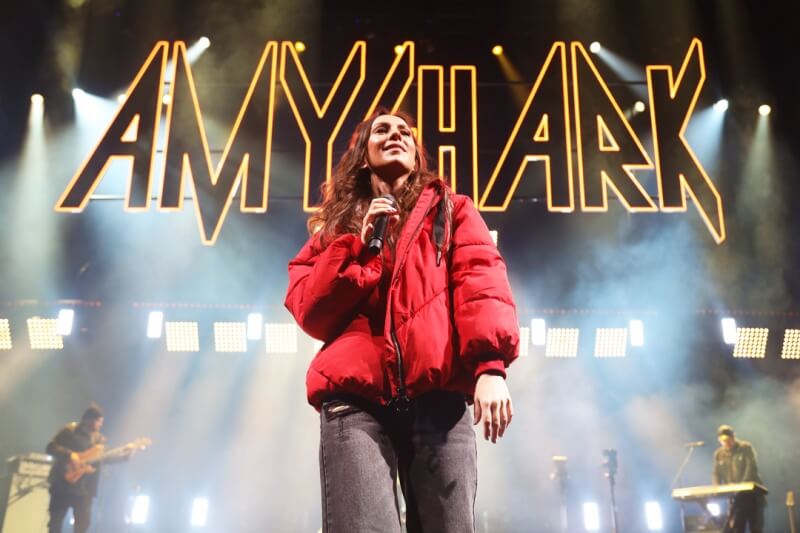 It’s a cold Saturday night in Sydney but things are about to heat up over at Qudos Bank Arena. Amy Shark played a killer set in Newcastle last night and tonight it’s Sydneys turn to experience the adorable singer, songwriter. Her current tour is in celebration of her new album Cry Forever which has seen great chart success, offered numerous hit singles and in our opinion is a strong contender for album of the year. Kicking off the night were energetic supports Teenage Joans and Evie Irie but tonight was all about Amy.

The time had come for Amy to take to the stage as a murky purple fog blanketed the stage, she appeared starting out with “the wolves” the first track from her new album. The Sydney arena fans were in full voice setting the tone for the evening. Next up was “Everbody Rise” her first single to be released from the album and an instant crowd-pleaser. Throughout the show Amy would give us anecdotes between songs even showcasing her cute mastery of the New Zealand and British accents.

For “C’mon” Amy admitted she didn’t have the best drummer in the world Travis Barker here tonight but gave praise to her own skillful drummer Joey Malafu. The audience lit up the entire arena with their phones for “you’ll never meet anyone like me again” and the award for happiest sounding song goes to the lyrically sad song “worst day of my life”.

Now although it was an entirely seated concert Amy requested we all stand up for the next song which was a cover of The Killers “Mr Brightside”. The entire room instantly ignited showing the passion that live music brings. I actually saw The Killers do that song in the same venue back in 2018 and tonight Amy was just as good. “Mess her up” gave us a pyro ending showering the stage with golden sparkles.

For possibly her most emotionally personal song ever written “Amy Shark” she stood solo out the front of the stage with her acoustic as the audience felt every lyric. The song even had Amy visibly emotional by the moment, tearing up near the end. The song lyrics “You should see the shows I play and hear them sing the words I say” echoed through the arena hitting us all in the feels.


Amy then left the stage ahead of the encore as the Jaws theme music would summon the blue Adidas clad shark back to the stage. Next up was “baby steps” and then she took it all the way back to the song that essentially made her career “Adore”. Following on from that she played the song that she worked with Ed Sheeran and Keith Urban on “love songs aint for us’. She then ended the night with her anthem track “I said hi” as streamers shot across the audience with Amy leaving Sydney all loved up.