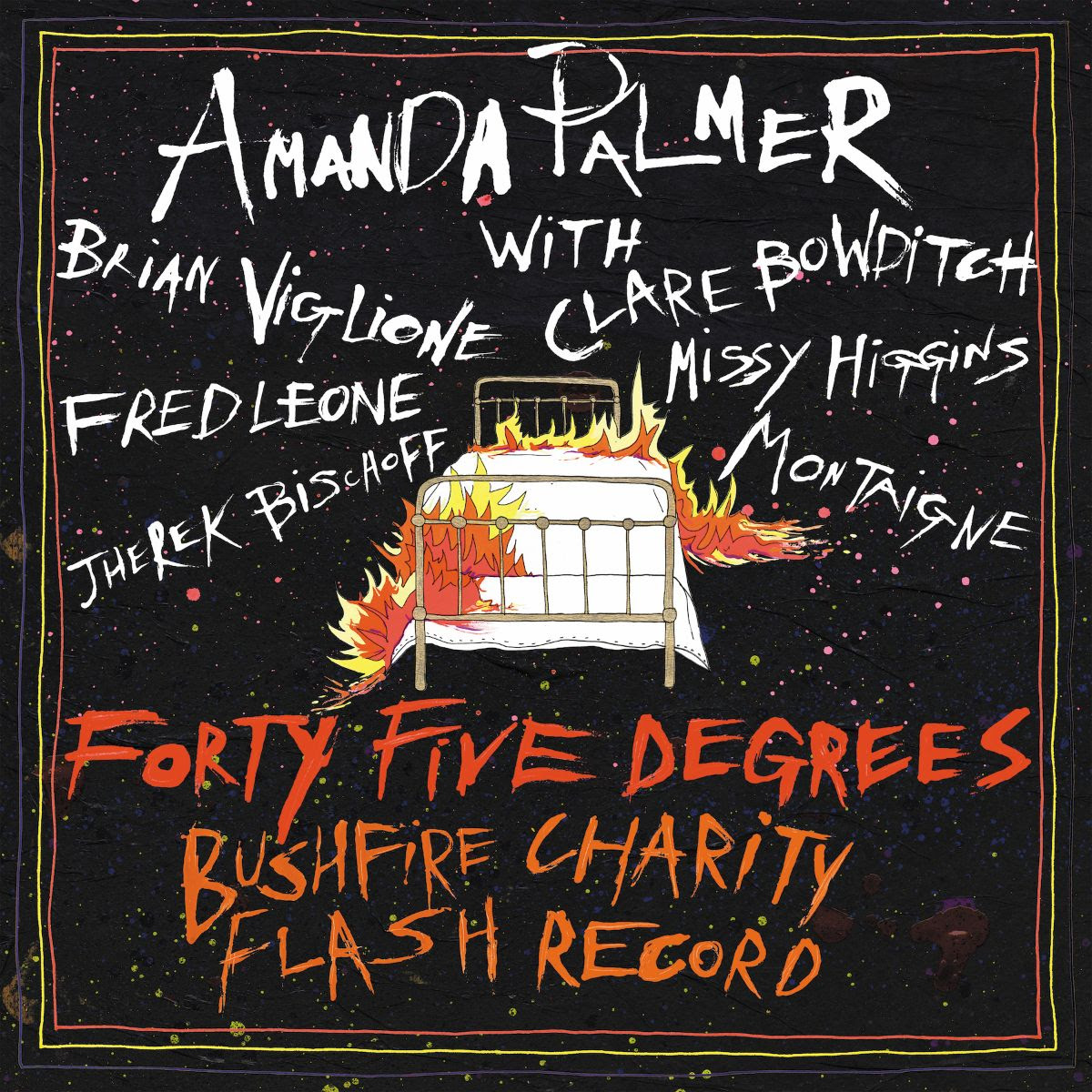 US musician, author and activist Amanda Palmer has announced Forty-Five Degrees: A Bushfire Charity Flash Record set for release on Friday, February 21. Recorded in just five days, the album is an immediate response to the ongoing bushfire crisis plaguing Australia with all proceeds going to Firesticks Alliance; an Indigenous led network re-invigorating and teaching cultural burning and land management.

Forty-Five Degrees: A Bushfire Charity Record came together at a dizzying pace between tour dates at Sing Sing Studios in Melbourne with the help of Missy Higgins, Montaigne (singing on “Truganini”), Clare Bowditch (singing on “Black Smoke”) and Fred Leone (playing didjeridoo on “Solid Rock”) who dropped everything to be in the studio and lend their talents to the effort. The album also sees Amanda reunite with Brian Viglione of The Dresden Dolls who plays drums across several tracks and long-time Palmer-and-Higgins collaborator Jherek Bischoff providing guitar and both electric and upright bass. The album was helmed by local engineer Anna Laverty and produced by Amanda with Ross Cockle on mastering duties. The artwork was created specifically for the project by newly-minted Australian citizen Sarah Beetson.

Every song has ties to Australia, but it doesn’t stop there: each song is also deeply political. Featuring a new original song, “Suck It Up, Buttercup”, penned in Tasmania after a Mona Foma residency in a confessional booth during which Palmer spoke with over 100 people in Launceston about their fears and histories of abuse, the album also contains covers of songs by Midnight Oil, Ted Egan, Jen Cloher, Goanna and Emily Wurramarra. Most songs were suggested by Amanda’s Patreon community who inspired the emergency effort. “My ability to move and work fast is made possible by 15,000 full-time supporters on my Patreon crowdfunding page. As the bushfires hit global headlines, many of my patrons reached out and wanted to know if we could collectively help the cause, given that I was touring here,” says Amanda.

Currently on an extensive tour of Australia with her critically acclaimed theatre show There Will Be No Intermission, Palmer has witnessed the urgency of the climate crisis in real time as bushfires ravaged communities all round the nation and wanted to contribute to the relief effort as soon as possible.

“I’m an American, and an American who loves Australia deeply. Neil (Gaiman, my husband) and I landed in Melbourne in advance of my current tour a few days before Christmas, just when the fires really began to rage,” explains Amanda.

“It started with the idea of just covering “Beds are Burning” on solo piano, but then my patrons started clamouring for “Solid Rock”, a song I’d never heard of, and then I called a few friends to help, and the next thing you know, well, we had a whole record. We tracked and mixed eight songs in about five days between my tour dates.

“We decided to give all of the profits to Firesticks Alliance, as a way of looking towards a more hopeful future, one where we are able to learn from the traditional custodians of this land, instead of just paying lip service.

“During my last trip to Australia in 2017, I started reading more deeply about Indigenous land rights and Australia’s unique problems with the climate crisis. I thought I knew things, but I had no idea how much deeper and darker the story ran. This devastating round of bushfires simply cannot be untangled from the spiraling knock-on effects of colonialism and climate ignorance.

“If Australia is the canary in the dark climate coal-mine, I hope a bunch of artists making a response record like this, so fast and with such generosity, can provide a little crack of light.”

Firesticks Alliance Indigenous Corporation is an Indigenous led network and aims to re-invigorate the use of cultural burning by facilitating cultural learning pathways to fire and land management. It is an initiative for Indigenous and non-Indigenous people to look after Country, share their experiences and collectively explore ways to achieve their goals.

Oliver Costello CEO Firesticks Alliance Indigenous Corporation shared: “We are immensely grateful to Amanda and everyone that has contributed to the album. We hope that when people listen to this album, they can share in the love and hope that we feel flows from it. These generous contributions will support Firesticks and First Nations Custodians to continue to maintain and restore their Cultural Fire Practices and Connections to Country.”