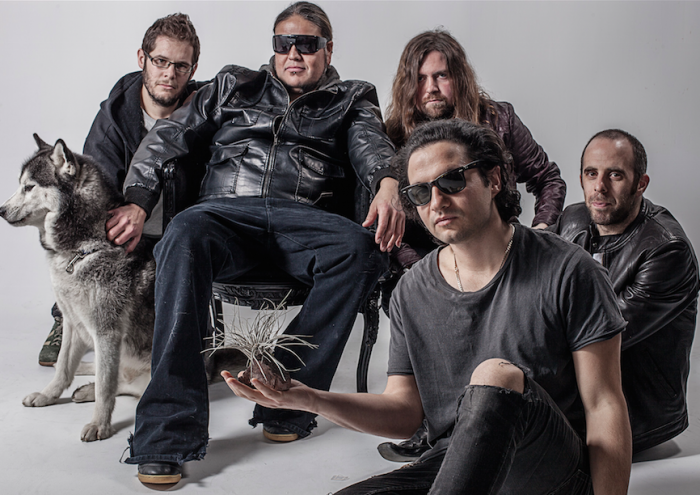 Fresh from supporting Dead Letter Circus and Caligula’s Horse, Melbourne’s psychedelic street dogs of rock AlithiA will be hitting the road for a national tour in support of their latest single and music video
Sacrifice. Sacrifice, a powerfully emotional and captivating track, is taken from the group’s critically acclaimed debut record To The Edge Of Time  (Bird’s Robe Records).
AlithiA will kick off their aptly titled The Psychedelic Street Dogs Tour in Adelaide on February 19, before returning to Melbourne for a massive hometown show at Cherry Bar on February 27. They will round off the tour with shows at The Factory Floor, Sydney on March 4, and in Brisbane at the New Globe Theatre onMarch 11, where they will be headlining El Grande Festival.
‘Sacrifice’ is the group’s heaviest work, featuring guest vocals from Zoltan Bodoczy of Hungary’s premier artrock quintet Grand Mexican Warlock. Quickly growing their reputation for frenetically explosive live shows, AlithiA also love to share their vivacious energy off stage. Building a community of ‘street dogs’, this is a band that celebrates a lifestyle without boundaries.  To be street dog is to re-write the rules…your way…share it…and have a ball with it…and join these crazies for the ride!
2016 is set to be a busy year for AlithiA, with their new album to be recorded between the crossroads of Europe and Asia, in none other than Istanbul, Turkey. Further international touring is on the horizon, which
will be complemented with the release of their new mockumentary-art film, also titled Sacrifice (directed by George Kalpa). In Sacrifice, a hawk-eyed film crew follows the group for 48 hours as band members go
through the motions, finding it difficult to come to terms with the proposed notion of an impending “departure show”.
AlithiA ’s reputation as a profound, deeply spiritual and entrancing live act has increasingly spread throughout the world, following recent supports of progressive luminaries such as Animals As Leaders
(USA), Dead Letter Circus, Ne Obliviscaris, sleepmakeswaves and Caligula’s Horse.
Listen to Sacrifice here
https://soundcloud.com/alithiaband/sacrifice-single-edit