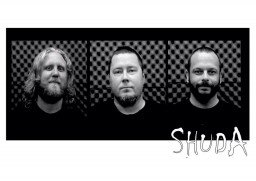 Shuda have just released their debut album upon the world full of hard rocking tunes.
These lads hail from Sydney Australia with a sound that can easily translate through rock radio stations worldwide.

Here’s a track by track breakdown

“shackles” really kicks the album into gear and sets the pace. With a guitar riff that won’t let up and Pete Davis’ growling vocals he is comparable to James Hetfield

“so wrong” is full of rolling drum beats and pulsating guitar licks. Topped off with catchy lyrics and some wicked guitar solos.

“hands on heads” slows things down but still has a dark side to it. Pete’s vocals echo witch urgency throughout

‘kick the door” would not sound out of place blaring from your favourite rock radio station. Super catchy lyrically and riff heavy. A definite standout track on the album.

“All in my hands” starts out with panpipes and builds into a rocking guitar driven number. Paul Griffiths gets the chance to shine on bass in this track.

“Tear down, rebuild, begin” gives you a catchy chorus combined with thunderous drums. Also some signature Shuda guitar solos thrown in. The songs sound like it was made to be played live and loud.

“I don’t need you” spits lyrics at you in true hard rock fashion. This song does not apologise and with it’s relatable lyrics and chugging guitars it doesn’t need to.

“What’s yours is mine” yet again confirms that Shuda are great at what they do. Providing another heavy rock gem with a chorus you will instantly find familiar.

Shuda is a band on the rise and its easy to see why. Influences from an array of artists can be heard throughout ‘One’ including Metallica, Deftones and AC/DC. Whilst this album gives a nod to hard rock bands of the past we believe Shuda is ‘One” band to watch in 2015. 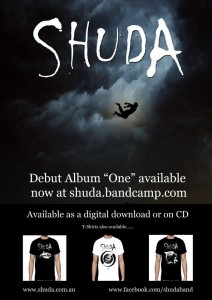